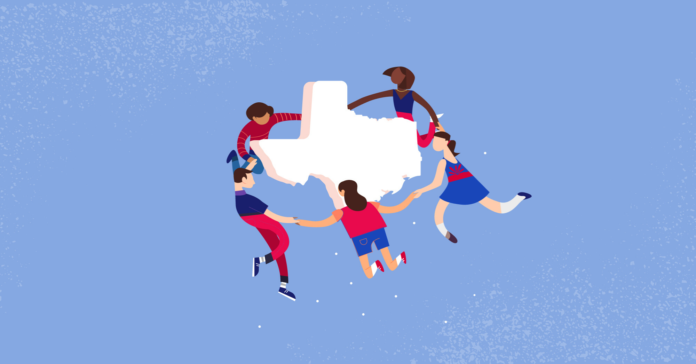 In a recent announcement that Texas would not accept new refugees in 2020, Gov. Greg Abbott made Texas the first state to close its doors on those in the federal refugee resettlement program, stating in a letter to Secretary of State Mike Pompeo that the state has a “responsibility to dedicate available resources to those who are already here.”

The problem is, Texas citizens can’t receive those resources, leaving many to wonder about his rationale for the decision.

“When we think about refugees, people get mixed up,” says Michelle Serrano, communication strategist for the RGV Equal Voice Network.

“What Abbott is doing is glomming on all the folks at the border with people who have viable asylum claims and saying, ‘we have too many! We need to allocate our sources for the homeless.’ The people who qualify for asylum are a tiny population compared to the homeless in the area, and the funds for their resettlement legally can’t just be shunted over to fight homelessness.”

Federal funds allocated for refugee resettlement cannot be spent on other safety net programs. Abbott is aware he cannot simply take the money from the refugee program and use it to address homelessness in the state. Instead, the governor’s position seems to be that nonprofits working with refugee populations should be encouraged to work with people already in the state instead.

“The Governor’s point is not money; it is effort,” said Abbott’s spokesman John Wittman in an email to The Texas Tribune.

Assuming this argument is in good faith, it’s unlikely that nonprofits serving refugees will shift course as a result of Abbott’s announcement. Serrano says that a great many of the people who are working with asylum seekers are not receiving federal money as it is.

“Nobody here is being federally funded,” says Serrano. “Most of the people here are volunteers, the lawyers are working pro bono. The [senior advisor for policy for President Donald Trump] Stephen Miller policy has laid out so many restrictions on immigrants that it’s virtually impossible to get here or stay there.”

The United States currently has a cap on accepting 18,000 foreign refugees. President Donald Trump lowered the cap of 30,000 set by former President Barack Obama. Since Trump took office, the number the country takes in continues to decline.

The move by Gov. Abbott, who made mention of “disproportionate migration issues” at the southern border, has many political ramifications for the Republican base in Texas. But federal refugees in the United States are legal immigrants who have gone through extensive vetting processes by both federal and international agencies, often waiting years before admission to the country.

Border security and federal refugee resettlement are distinctly different issues. And since neither the funds or efforts of nonprofits can be easily switched to dealing with other Texas problems, it’s unclear why Gov. Abbott would make Texas the only state to participate. The announcement goes against eighteen Republican governors and multiple religious organizations eager to help “individuals and groups…forced from their homes,” as Republican Utah Governor Gary Herbert wrote in a letter to President Trump.

“Because of the xenophobia and the headlines and the hot-button terms that strike fear into the hearts of regular working-class people, he’s able to say these things and people believe it,” says Serrano.

“They want an easy explanation. These are all political moves. Spring migration is coming and it’s easy for them to latch onto pictures and videos to scream how we need to stop this. Migration is neither good nor bad. It just is. Most undocumented people live a very hard life in Texas. They usually don’t stay here.”

If the recent temporary block from a federal judge becomes permanent, local governments would not have the power to veto where refugees settle, rendering Abbott’s decision moot from a legal perspective.

But the idea that Texas does not welcome refugees in the state, as announced by its top elected official—that will not be forgotten.