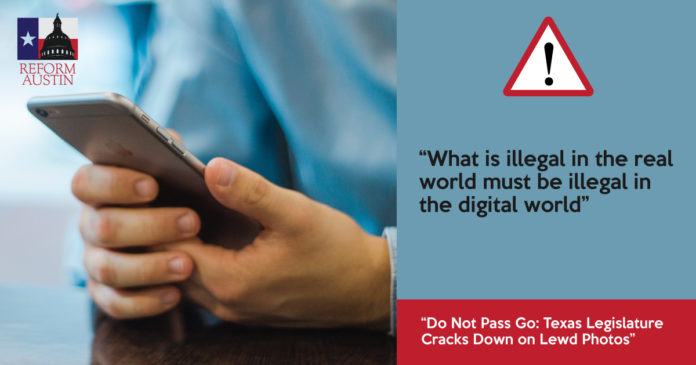 Come September 1, certain digital behavior of a number of Texans across the state will be criminalized: HB 2789, signed by Gov. Abbott, classifies nude or sexually explicit photos sent without consent as a Class C misdemeanor, punishable by a fine of up to $500. Essentially garnering the same punishment as a speeding ticket, the bill set forth by Rep. Morgan Meyer (R-Dallas) includes electronic forms of crude communication through text messages, social media, and online dating profiles.

The creator of Austin-based dating app Bumble, Whitney Wolfe Herd, has teamed up with Rep. Meyer to create some consequences for the perpetrators of online sexual harassment. According to Herd, a recent study of Bumble users found that one out of every three users had received an unsolicited lewd picture. “What is illegal in the real world must be illegal in the digital world, and this legislation is a first step in the right direction in adding that accountability,” Herd said.

However, some legal experts maintain that the bill’s sweeping language is expected to face challenges. J.T. Morris, an Austin-based lawyer specializing in First Amendment rights claims the bill “looks to be significantly overbroad because it looks to criminalize the sending of information that could have legitimate purposes […] This has some real First Amendment concerns.” Some of these legitimate reasons could be concerning a medical issue or a photo of a woman breastfeeding, both of which would fall under the bill’s scope.

The bill is also not retroactive in that it wouldn’t address instances that have happened before September 1, 2019. To this point, Senator Charles Schwertner (R-Georgetown), who was accused of sending explicit photos to a University of Texas student last year, would not face any penalties as the investigation was concluded prior to this legislative session.

Ultimately, Rep. Meyer remains confident: “We understand enforcement will be a challenge. We really do. However, this bill is intended to serve as a deterrent as well in keeping people aware that sending unsolicited lewd photos will now be a crime and will not be tolerated as a message we want to send.”