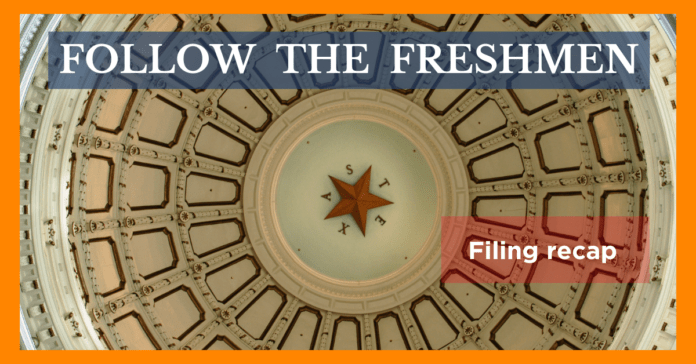 Sixth in an ongoing series
A month has passed since the bill filing deadline, so it is time to recap on the status of the bills and which have passed out of their respective chamber.
Since our last update, nearly 1,000 bills were filed by the total House and Senate freshman. However, out of those bills, only six authored by freshman have passed their respective chambers.

Out of the three House freshman who passed bills, Rep. John Bucy (D – Austin) led in filing with 31 bills, followed by Rep. Ben Lenman (R – Anderson) with 19 and 15 from Rep. Steve Toth (R – Woodlands). Each representative has had one bill pass into the Senate with issues relating to public education, higher education, and elections.
All three bills passed the House unanimously, the most notable coming from Rep. Toth’s HB 674, which allows education service centers to report their findings to the education commission. Rep. Bucy’s HB 1214 further ensures voters across Texas require a street address, building, and room number of the polling location to help new voters and those unfamiliar with the area.

Two Democrats, Sen. Carol Alvarado (D – Houston) and Sen. Beverly Powell ( D – Burleson), each filed over 55 bills, with one passing into the House. Sen. Pete Flores (R – Pleasanton), who filed the least number of bills – 26 – back in March, also had a bill pass the Senate Chamber. The bills relate to water and rural affairs and natural resources and economic development.
Similarly to House bills passed, the Senate freshman bills also passed unanimously. In the Senate, all three bills sought to create efficiency in their respective area. Within the Texas Water Development Board, Sen. Alvarado’s SB 1574 would remove several obsolete and duplicative requirements in the current process. Sen. Powell’s SB 450 removes additional notification duties placed on the comptroller of public accounts by extending the filing deadline for the required annual reporting. Lastly, Sen. Flores’ SB 925 amends current law relating to calculation of daily production for purposes of oil and gas production tax credits for low-producing wells and leases.
Reform Austin will continue tracking the bills each freshman legislator has introduced and their status this session. To find out more about legislators’ specific bills status visit the Texas Capitol site: https://capitol.texas.gov/Reports/BillsBy.aspx

Facebook Censures Steve Hotze and His Conservative Republicans of Texas

As Selena’s Legacy Lives On, San Antonio Is Hosting a Huge...

T-Mobile and Sprint Are Merging, but 5G May Further Divide Texans