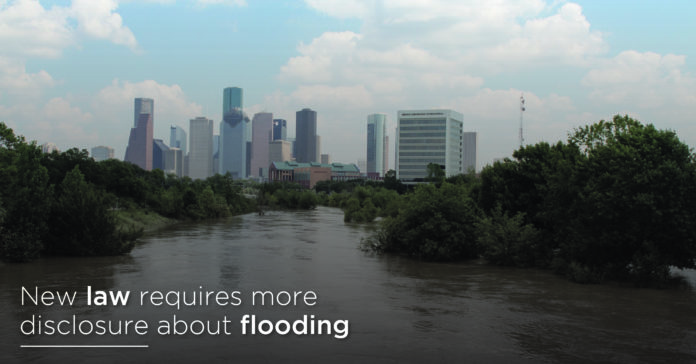 Following the devastation of Hurricane Harvey and Tropical Storm Imelda Texas has been wrestling with the best way to deal with the next inevitable storm to wreak havoc. One of the protections voted into existence by the state is a law expanding the amount of flooding information homeowners and realtors must disclose when selling a home.

Extra attention is paid to whether the house is located near a reservoir that might require controlled drainage. During Harvey, the Army Corps of Engineers staged a controlled release of the reservoir as water threatened to overflow, and the subsequent rush of water in the drenched city caused flooding in some areas up into second-floor apartments.

Allison Campos remembers the Tax Day Floods of 2016 as catastrophic for her and her family. She had received no information of past flooding that would have been included under the current law when she was living in her house in Pinehurst. As the waters rose, she watched her cats drown and were barely able to escape.

“When Conroe opened their dams, which was the flash flood that hit us when it wasn’t even raining, and they knew they were flooding us, we were not warned at all,” says Campos.

“If we had not been completely financially devastated, we should have all sued them. They told us we were in a 100-year floodplain. I found out later the area flooded like that only 10 years earlier. I’ve been by there recently. Several of our neighbors that own their property have since elevated their trailers onto stilts when they rebuilt like you see with beach houses.”

The law is part of a national push that hopes to institute the requirements across the country. Unfortunately, there is some pushback to do so. One of the reasons is that greater attention to the floodplain maps can have negative effects on homeowners.

When maps are updated and homes are included in the new floodplains, their resale value drops. Flood insurance rates also rise, and that can price people out of their homes. This has led to some communities seeking to delay updating the floodplain maps.

Joel Scata, a flood expert at the National Resources Defense Council, recognizes the problems the maps can cause but feels that they are vital to a future where flooding is still likely to occur.

“The floodplains maps are the primary source for communities to know about flooding,” says Scata. “Faulty maps leave homeowners vulnerable. Having accurate [maps] helps mitigate their risk of flooding. If a map is decades out of date, like during Sandy, it leaves these communities in the dark. Issues with a possible rise in insurance costs are outweighed by increased communication.”

FEMA requires that the maps be updated every five years, but they often aren’t for various reasons. One is simply funding for new flood information. Redrawing the maps to accurately show how floodplains have changed is an expensive and daunting task, says Scata.

Congress has increased the budget for the endeavor, but as climate change continues to make storms that hit the Texas coast harder and more erratic, it is somewhat difficult to keep up with the shifting conditions.  That, and there is only so much that past flooding can tell us about the rains of tomorrow.

“The maps do not depict future conditions,” says Scata. “It only presents a snapshot in time.”

Still, the new disclosure law is likely to shift Texans away from some risky buying behavior thanks to greater access to information. It may not help some people’s home liability, but in general, it can give Texans a better understanding of where they are choosing to live.

When the next storm hits, the hope is that there will be fewer people driven out of their homes by rising water.

“The law is very valuable to helping the people of Texas,” says Scata.