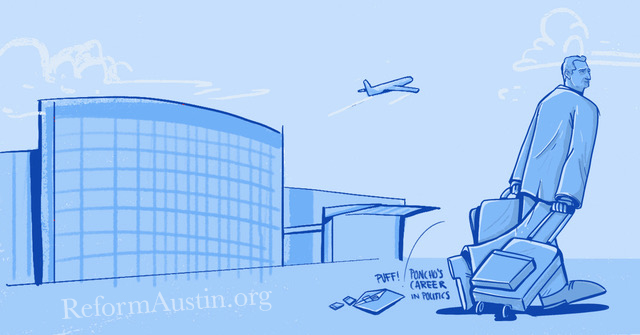 State Rep. Poncho Nevárez (D-Eagle Pass) has made headlines in the last few sessions. In 2015 he was threatened by open-carry advocates, which resulted in 70 members of the Texas House of Representatives wearing stickers and buttons saying “I’m Poncho.”

In 2017, Nevárez got into a heated argument with another member of the House which resulted in mutual death threats. And now Nevárez has been arrested for possession of cocaine.

How did a promising legislator with a history of supporting progressive causes wind up getting charged with a felony? Here’s how.

Sep. 6 – Rep. Poncho Nevárez arrives at Austin Airport by private plane owned by his law firm holding an envelope. Nevárez exits the airport through a section used by state officials traveling on business.

He drops the envelope outside the airport entrance as he enters a Black SUV owned/driven by his Chief of Staff.

TxDOT officials find an envelope with the letterhead of the Office of Poncho Nevárez, open its contents, find 4 baggies of white powder (later confirmed as cocaine) report it to DPS Aviation Division.

Nov. 6 – Poncho Nevarez announces he will deactivate his FB page.

Nov. 8 – Poncho Nevarez announces he will not seek reelection in 2020.

Nov. 14  – Travis County Magistrate Judge signs off arrest warrant charging Nevárez with third-degree felony possession of a controlled substance, 1-4 grams. A third-degree felony can be punished with 2- 10 years incarceration and up to  $10,000 in fines.

Wishing my friend, @poncho_nevarez and his family strength & love to make it thru. I have no doubt you can. Take care of yourself—the people who love you are counting on you to get better.#txlege

Statement from @TexasHDC Chair @ChrisGTurner on @poncho_nevarez — “I am deeply saddened to learn today’s news but I am also encouraged to see that, through his statement today, Poncho is taking responsibility for his actions and intends to seek treatment.” #txlege pic.twitter.com/84HrittCtl

While I’m saddened by the circumstances, I’m relieved Poncho is taking responsibility & putting his health & family first. Addiction is insidious & the stigma makes it worse; admitting a problem & getting help is a huge step towards recovery that takes courage. #txlege @samhsagov pic.twitter.com/uGAz1CSyV0

“Addiction is a serious illness and acceptance is the first step to recovery. Today, Chairman Nevárez took full responsibility for his actions and intends to seek treatment towards a better health for himself.” #TXlege pic.twitter.com/UygrNLCXju