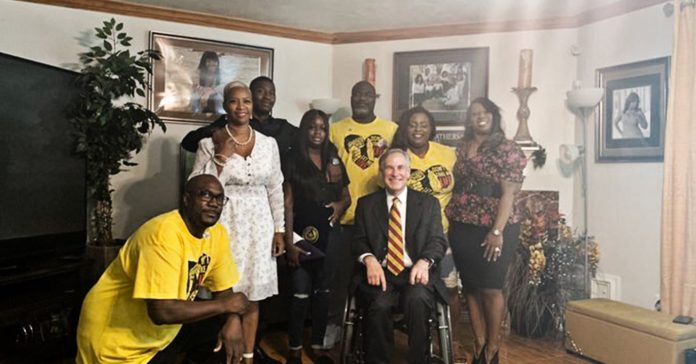 In talking to media outside the Houston church where George Floyd’s funeral will be held Tuesday, Gov. Greg Abbott pledged to work with Floyd’s family on reforms for Texas.

Abbott called Floyd’s death the “most horrific tragedy” he has ever personally observed.

“George Floyd is going to change the arc of the future of the United States,” he said. “George Floyd has not died in vain. His life will be a living legacy about the way America and Texas respond to this tragedy. I am here to tell you today that I am committed to working with the family of George Floyd to ensure we never have anything like this occur in the state of Texas.”

“His family asked me, and I promised his family that I would use and incorporate their family in these discussions,” Abbott said. “The pathway forward will not be taken over by politicians, but will be led by victims. It will be led by the people who have suffered because of racism for far too long in this state and this country.”

Abbott expressed his condolences in a private meeting with the family. He gave them a flag that has flown over the Texas Capitol.

Abbott’s strong remarks come on the heels of a week in which numerous other Texas GOP leaders were spreading racist information on social media about the protests over Floyd’s death.

The Texas Black Legislative Caucus has requested a meeting with the governor for Wednesday to discuss the path forward for reforms.