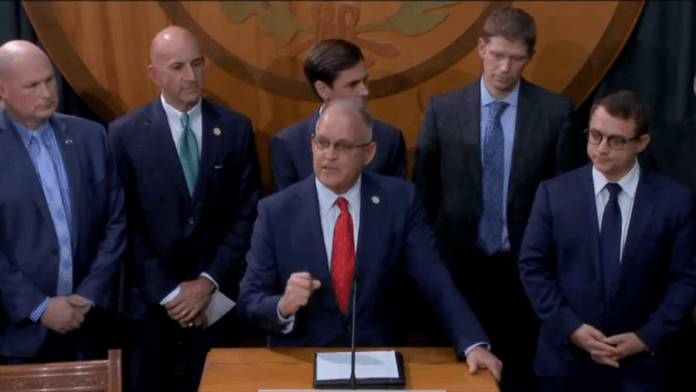 Bill Zedler (R-Arlington) was also elected Vice-Chair of the Freedom Caucus.
In the past, the group has been known to be aggressive in pushing their agenda. This included using procedural tactics to block legislation like the “Mother’s Day Massacre”, when they blocked over a 100 bills in retribution for what they called “petty personal politics” by House leadership preventing their priorities from being debated and voted on the floor.
The Freedom Caucus has eight priorities for the current session, which Lang said is different and more “positive” from previous sessions because of the new Speaker, Dennis Bonnen (R-Angleton).

Their top two legislative priorities keeps them in lockstep with the House Speaker, the Governor, and the Lieutenant Governor: reforming school finance and property tax relief.
In regards to school finance, Matt Shaheen (R-Plano) said the Caucus’ aim will include fixing Robin Hood. He also said they were “excited” about some of the recommendations from the Commission on Public School Finance, including merit pay for teachers, incentivizing teachers to work in highest need schools, and investing in early childhood education.
For their priority on pro-life legislation, Shaheen added this included supporting Freedom Caucus member Briscoe Cain’s (R-Deer Park) fetal heartbeat bill, HB 1500. “We love little babies in the state of Texas and we’re going to do everything we can to protect them,” said Shaheen.
On protecting the 2nd amendment, Middleton said this includes supporting Freedom Caucus member Jonathan Stickland’s (R-Bedford) constitutional carry bill, HB 357, and opposing any red flag laws.
On religious freedom, Middleton said the Caucus will be supporting legislation that strengthens it and opposing any legislation that weakens it, without pointing to any specific bills.
In talking about their focus on banning taxpayer-funded lobbying, Middleton mentioned his own bill, HB 281, to end the practice. Middleton also claimed the lobbyists representing cities and counties will be “killing property tax relief and reform.”
Matt Schaefer (R-Tyler) ended their list of priorities by saying border security is “a federal responsibility, but Texas’ problem.” He claimed that over 10,000 people were detained last week for illegally crossing the border in Texas alone. In the three weeks prior to that, Schaefer claimed over 23,000 people were detained in Texas. Customs and Border Patrol (CBP) reports on border apprehensions every month. According to CBP data, 47,893 people were apprehended in the month of January across the entire Southwestern US border. To say that over 33,000 people in the last month were apprehended in Texas alone is a spurious claim, but hard to verify.
In following their priority on border security, the Freedom Caucus supports the nearly $800 million appropriation in the House base budget for border security and will defend it from any attempt to reduce it. Schaefer also said the Freedom Caucus “supports Trump’s effort to build a [border] wall in Texas”, believing it to be beneficial for Texans.
When asked by reporters about reducing the criminal penalty for marijuana, Lang said the issue is fluid and the Caucus has no position.
Lang said these priorities are “for the grassroots and from the grassroots”, and they remain the focus of the Freedom Caucus.