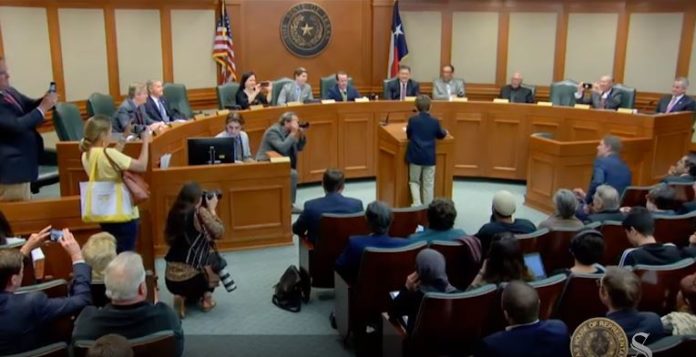 Participating in testimony at the Capitol is so easy a toddler could do it… and they sometimes do.

If you want to testify for a bill in the Texas House or Senate, the process is simple. Fill out the kiosk on site at the Capitol or access Capitol WiFi and register on your own device, record your contact information, demographic data, and your stance on the bill.

Then you are just a click away from accepting personal legal responsibility for your statements. Finally, wait until your name is called to take part in this democratic process. An observer will see Texans of all ages testifying with ease. Any age with no regulation or documentation required.

It’s neat to see how this works and to participate. Many people, not just Texans, but citizens of the United States come during session to take a public stance on bills they either support or oppose.

One such opportunity this session is HB 234.

HB 234, affectionately known as the lemonade stand bill, had three children who testified for the bill. This bill came to life because kids were being asked for permits from local government to run their beverage businesses.

The audience heard from an eight year old entrepreneur who raised money for charity and two older teens who cited these types of stands as their first exposure to the business world. Both teens continued to pursue business and have current ventures today.

These testimonies received a warm response from the room including from the representatives serving on the committee of State Affairs, who were recording the 8 year old as he spoke and taking pictures. People laughed and applauded.

Another opportunity to see young people involved in the process was HB 896.

HB 896 would criminalize abortion giving the unborn child the same rights as any other human being. This would allow women and doctors who participate in an abortion to be tried for murder and leaves no exceptions in the case of rape and incest.

Thirty-nine minors testified in hearings for HB 896. This hearing was heavy and had graphic language, but was juxtaposed by the same applause and laughter as the other committee hearing, even going as far as inviting the young testifiers to come and sit with the representatives during a portion of the testimony.

In the Texas courts, if a minor is testifying, there are protective measures in place. Some of these measures are simply making sure these young people are mentally and emotionally stable enough and competent to make legally binding statements. Some of these measures are just the simple release of information from the guardian of the minor. Either way, there are protections in place that shield young people.

Personal beliefs on the policies and politics aside, we are putting these minors in a vulnerable position due to the lack of privacy. This recorded testimony has no limitations on who is testifying, nor is there any document required granting permission from a parent/guardian. In fact, according to the Committee Coordinator’s office, a minor doesn’t need to be accompanied, signed in under, or have the acknowledgment of a parent or guardian to do anything pertaining to testifying.

What may get lost in the weeds, is that this is a public, recorded statement that is forever archived in the online database accessible beyond the session. It is considered sworn testimony under penalty of perjury. Young people have a stake in the fight, because they live here and are Texans. However, are they really ready to have a stake in the public forum? Are we prepared to subject minors to the consequences of them acting as experts on all issues that come up in the legislative session?

This feels like an oversight in the rules that could end up negatively affecting young people. They become public figures in a sense, and are commenting on hot button items. Where does privacy make its way into our democracy for those who are not even eligible to vote, or legally allowed to make decisions for themselves? Is this a safe practice for Texas to uphold? If minors have to be deemed competent to speak at a trial, shouldn’t there be some level of competency checked here? If you can’t go see an R-rated movie without an adult’s consent, should you be allowed to sign a legally binding document by clicking the “I agree” box?