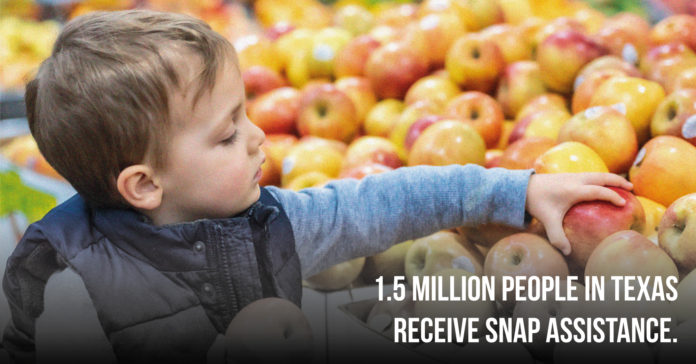 Legitimate need for food assistance has long been challenged by those that argue the system is rife with applicant misuse and fraud. Yet a recent investigation by The United States Department of Agriculture found Texas state administrators, rather than SNAP recipients, were guilty of submitting false data in a bid to increase performance bonuses awarded “to states that report the lowest and most improved error rates each year.”

To resolve the false claims, The U.S. Department of Justice announced that the Texas Health and Human Services Commission has agreed to pay $15.3 million.

Texas SNAP recipients weren’t affected directly at the time, but the decision to perpetuate fraud for the gain of state administrators doesn’t help the program’s reputation, or those most in need of its services.

In early December 2019, the Trump administration announced its decision to tighten the standards on qualifying for SNAP, putting many food insecure Americans, and Texans, at risk.

New rules, which make up the first of three regulations, will go into effect April 2020, and cut food assistance to those who are “able-bodied.”

The new rule affects the eligibility of able-bodied adults between the ages of 18 and 49, and is measured against if they are proactively pursuing work opportunities; the rule doesn’t apply to children and their parents, those over 50 years old or the elderly. The U.S. Department of Agriculture (USDA) stated in a press release, “long-standing SNAP statute limits these adults to three months of benefits in a three-year period – unless they work or participate in work training for at least 20 hours per week.”

Promoting self-sufficiency is the core message. The U.S. Agriculture Secretary Sonny Perdue said in the same press release, “Now, in the midst of the strongest economy in a generation, we need everyone who can work, to work. This rule lays the groundwork for the expectation that able-bodied Americans re-enter the workforce where there are currently more job openings than people to fill them.”

Although SNAP is federally funded, each state determines eligibility and the distribution of food stamps. This past September the U.S. News & World Report reported, “researchers estimated Texas would have the highest number of households slated to lose benefits, at 233,195 – accounting for nearly 390,000 people.”

An interactive map from researchers of the Mathematica organization predict that for the 1.5 million households in Texas receiving SNAP food assistance, 15 percent will lose benefits from the new rules and eligibility changes.

“Every cut to SNAP hurts our community, but regarding the recent ruling, Texas has been subject to this strict regulation for a long time now,” says Melanie Pang, government relations officer for the Houston Food Bank, the nation’s largest Feeding America food bank. Pang told Reform Austin, “We know that it takes time to secure stable income or employment, and when this ruling change happens, it will make it even harder for people to access safety nets like SNAP in a future economic downturn and will also make it more difficult for us to provide benefit assistance to those who are struggling to find work.”

During the next round of rule changes, assets affecting eligibility are on Texans’ minds. For example, an applicant’s car value could be the deciding factor. According to the Texas Tribune, “Under Texas law, SNAP participants cannot own a car that is valued at more than $15,000. If the proposed rule change goes into effect, that number would drop to $4,650.”

Despite the assertion from some public officials about the economy and its relationship to the workforce, barriers for lower-income families are complex. Cossy Hough, the Assistant Dean for Undergraduate Programs and Clinical Associate Professor at The University of Texas at Austin Steve Hicks School of Social Work, told Reform Austin, “Indicators of a strong economy, including unemployment rates and stock prices, can be misleading for people who are living in poverty. Often people who have lived in poverty for long periods of time face a multitude of barriers in being able to work and a low unemployment rate won’t translate to jobs for them.”

One important barrier is access to medical care and the ability to pay for it. Hough explained that, “In Texas, the situation is made worse by aggravating factors such as the refusal of the state to expand Medicaid under the Affordable Care Act. Texas continues to have the highest rate of uninsured citizens in the U.S. So, you have complicated scenarios stacking up the odds against people, especially adults, who have one or more chronic illnesses, can’t afford health insurance and don’t receive the healthcare they need, yet they may not qualify for disability benefits and may be seen as able to work under SNAP rules. These SNAP rules could really penalize people in very vulnerable situations.”