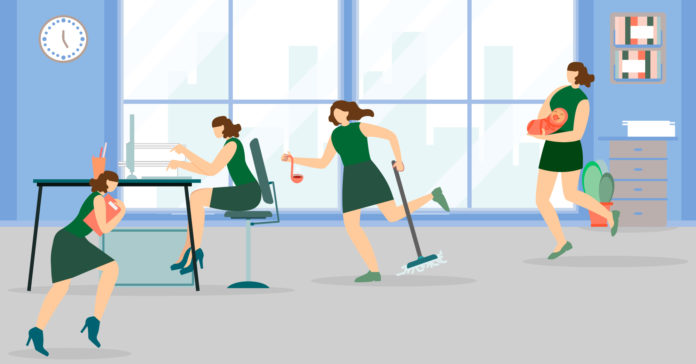 Ryan Dennis pushed back from the conference table midway through a leadership team meeting at a Houston nonprofit early in January. She pulled some equipment out of a tote bag, placed it under her baggy sweater, and hit the on switch for her breast pump. The meeting continued, agenda items were checked off, and two more bottles of breastmilk were banked for her infant daughter.

“I have to do it. I don’t have a choice,” Dennis explained. “I have to pump. We have to talk about this or things won’t change.”

Imagine, I asked her, what would happen had she hooked up her pump to express milk on the floor of the Texas Legislature.

That day will no doubt come much sooner thanks to a newly-elected member who has gone well beyond talking about it.

During the 2019 session, Rep. Erin Zwiener (D-Driftwood) became the first member of the Texas Legislature to breastfeed on the floor of the House of Representatives.

While campaigning, the thought of being the first member to breastfeed on the floor motivated her. “I knew it would be my only chance to be the first one.”

But then, “when it happened, there was stuff going on the floor, and she was hungry,” Rep. Zwiener shared. “It wasn’t a messaging thing and it wasn’t a big deal. She was hungry. I fed her.”

Zwiener openly discussed her status as a mother throughout the course of her long-shot campaign for an open seat in District 45. In a contentious three-way primary, and a subsequent primary runoff, she made motherhood a core part of her story.

“I could let the pregnancy be a liability or I could try to turn it into a strength. There was no way it was a neutral thing.”

Many people supported her willingness to run while pregnant and govern while parenting—but not everyone.

Her campaign shared a video on social media discussing the issue head-on.

While many left words of encouragement, a man from Dripping Springs said, “she is a nice lady but she needs to be at home with her kids, not working long days in government.” Others agreed.

Her response was a gentle and humorous rebuke. She posted a photo collage of a member of the European parliament casting votes with her child on her lap, and captioned the photograph, “my daughter has goals.”

“It was pretty easy to hear [negative comments like that one] from people whose support I wouldn’t have anyway, but it broke my heart when I got comments like that from other young women. I want them to believe it’s possible, that they’re not giving up their kids to follow an unusual career path, and they’re not giving up a career to have a family.”

Zwiener speaks often about the benefits and challenges of legislating while parenting, and acknowledges that she has a much easier time of it than many would.

“The tremendous blessing of being in the Legislature is that no one gets to tell me I’m not allowed to bring her. My bosses are the people who elected me, and they knew who I was.”

Her office stood out during her first session. While other legislative offices feature artwork from their districts, or meaningful pieces of furniture selected from the state’s collection, hers has a Pack ‘n Play set up in the corner. Her daughter came to the office with her almost daily.

The Texas Capitol expansion build-out will include onsite childcare, but in her first term, Rep. Zwiener was unable to secure a spot in a daycare facility close enough to her office to allow her to see her daughter at regular intervals.

“There are a couple of childcare facilities close to the capitol, but they had two-year waitlists. All of the infant spots are taken up by younger siblings.”

Had there been a spot, she confessed, the dollars spent on care would not have made sense. Thanks to her husband, who was able to shift his work schedule so he could keep their daughter, Lark, two weekdays each week, they made it work.

“As my toddler runs in a circle around the office, I realize the clock is running down,” she laughed. “We’re on the waitlist [for childcare] and I’m hopeful that by next session that it has shaken out.”

Childcare is an obvious and major hurdle, but simply being present in the pink dome while caring for a small child, whether you are a legislator or a tourist, presents challenges for any parent.

Now, the Capitol Extension features a lactation room, open to all members of the public, so hungry mouths can be fed. But when a parent faces that equally-critical moment when the digestive process for a young child reaches its final stage, the building doesn’t function terribly well.

“We don’t have changing tables in the main bathrooms of the capitol!”

Before she secured office space during the period between the election and the session beginning, “I changed her on this little foot-wide metal thing,” she shared. It was, she said, not an ideal set-up.

Ultimately, and regardless of the hurdles, it was her pregnancy that kept her going on the campaign trail, and her identity as a mother that keeps her focused on her work representing her district.

Acknowledging frankly that people had concerns, she said that quite simply, “the way to address those concerns was to keep showing up and doing the work and prove it isn’t the case” that being a mother disqualifies her. “I’m grateful infants are as portable as they are. I think she was three weeks old for her first block-walk!”