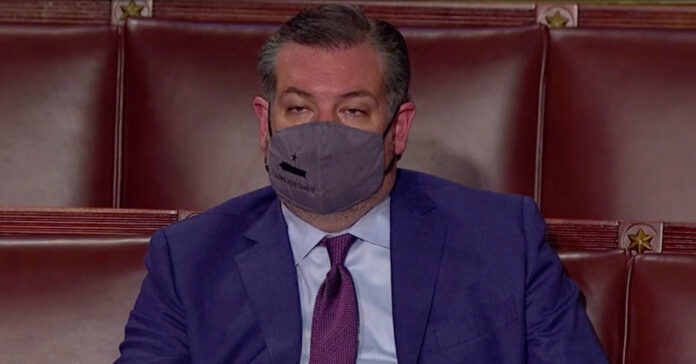 According to early data, around 11.6 million people watched President Joe Biden’s first congressional address Wednesday night. His speech looked back on his first 100 days in office and laid out his plans for the future of his administration.

“America is ready for takeoff. We are working again. Dreaming again. Discovering again. Leading the world again. We have shown each other and the world: There is no quit in America,” Biden said.

But one Texas Senator took the dreaming part quite literally, or at least it appears so since he was caught on camera falling asleep.

Senator Ted Cruz was caught closing his eyes and struggling to keep them open while President Biden talked about his administration’s plans for immigration reform.

“If you actually want to solve a problem, I’ve sent a bill. Take a close look at it,” said Biden while the camera focused on Cruz with his eyes shut.

Newsweek reported that the short clip has already been viewed more than one million times across several accounts that show different variations of the moment.

Many journalists and elected officials criticized the Senator for not taking his job seriously and even mocked him, calling him “Ted Snuz” or saying he was dreaming of Cancun, a callback to the time he left Texas during an unprecedented winter storm to vacation in Mexico’s beaches.