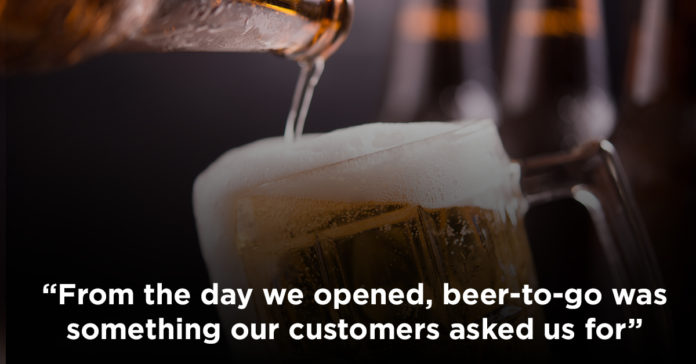 On September 1, craft breweries across Texas embraced the end of an era. On that fall day, the state relinquished its status as the only one in the country that prevented consumers from Texas beer-to-go, directly from the manufacturer.

The effort was led by the Texas Craft Brewers Guild, which represents more than 250 brewery members. The goal was to overcome the restrictions resulting from a decades-old structure governing beer sales in Texas. Developed in the wake of prohibition, the Three-Tier System requires separate entities to manage the manufacturing, distribution, and sales of alcoholic beverages.

For the booming craft brewing industry, this approach required customers to enjoy beer selections while visiting a manufacturer’s taproom or choosing only from those products available at a retailer.

But now, the constraints have been lifted. Breweries can sell up to 288 ounces per customer, per day, directly from their facilities, thanks to House Bill 1545. And although the impact is only beginning to materialize, Texas breweries are optimistic about the future.

Austin Beerworks, and its co-founder, Adam DeBower, had a front-row seat for the beer-to-go legislative effort, from start to finish. DeBower serves as legislative committee chair for the Texas Craft Brewers Guild, and Gov. Greg Abbott signed the bill into law during an event at the brewery.

“Every single day, we would have ten to twenty people come through the doors with an expectation that they could buy beer and take it with them when they left,” said DeBower.

In his push for the legislation, DeBower spent 30 out of the 140 days of last congressional session knocking on doors, meeting with elected officials and their staffers to make a case for change.

He also described the issue’s importance more broadly. DeBower considered it necessary to complete the sense of community that has driven growth in the craft beer industry nationwide.

“We spend most of our time at work or at home, and people are looking for that third place where they can spend time together and experience and opportunity to be together. And I think that’s something that we offer,” he explained. “It’s not so much that we’re selling beer. We’re giving them a place where they can come together and experience friendship and family and fellowship.”

On the business side, he expects beer-to-go sales to increase awareness and loyalty, driving overall sales, and the brewery’s October numbers have been highly encouraging. DeBower also expects to-go sales to create additional leverage for their efforts to bring new beers to retail coolers.

“If a beer that is developed in a taproom becomes successful, we can take that to HEB and Whole Foods or Central Market or wherever and tell them you know, this is a taproom beer that has been absolutely killing it,” said DeBower. “It’s an opportunity for us to demonstrate value to our partners out in the real world, outside the brewery.”

John Holler has dealt with the frustrations of the previous rules since opening Holler Brewery with his wife, Kathryn, three years ago.

“From the day we opened, Texas beer-to-go was something our customers asked us for,” said Holler.

A passionate opponent of the Three-Tier System, Holler, was particularly frustrated with the conversations that followed a request to buy Texas beer-to-go to enjoy later.

“Having to tell them ‘no’ meant losing a sale, but then having to explain why, when there was really no legitimate reason, meant poisoning an otherwise lovely customer experience,” he recalled.

Now, in addition to enjoying their time at the Holler Brewery’s taproom, just off Houston’s thriving Washington Avenue, patrons can take a case of Pub Crusher or growler of Dollar Pills Y’all home for later. Without hesitation, Holler also described another advantage of the change.

He went on to explain that informing customers they could now purchase their favorite brews to go has been predictably smooth.

“There is no effort necessary because this law makes complete sense. No customer is surprised when they find out it’s legal for them to buy Texas beer-to-go, because it’s legal in all other states, and it’s legal to buy wine from a winery and liquor from a distillery.”

Kevin Carr, who co-founded Community Brewing Co. with Jamie Fulton, has seen an overwhelming response from customers thanks to the new law. This is, in part, because they can now introduce them to a wider variety of products.

“We can now offer smaller-batch brews that otherwise would not be released to the market through our distributors and retailers.”

Despite the concerns from the other two tiers in the Three-Tier System, Carr expects the change will benefit everyone.

“Beer-to-go from breweries actually strengthens in-market sales because consumers are able to form a tighter connection with our brand,” he said. “The increased familiarity drives stronger sales both off- and on-premise, since they will still rely on grocery and liquor stores for most of their at-home beer needs.”

Carr added that walking out the door with some of their beer “adds a nice bow” to the overall experience of seeing the facility, meeting the team and enjoying the vibe of the company’s culture first hand.

Relying primarily on social media to let Community Brewing Co. fans know about the welcomed change, Carr did note that a few visitors have voiced their worry that it’s too good to be true.

“Some of them wonder if this change in the law is temporary,” he said. “There is still enormous distrust of our political system and the drivers that affect laws.”

As the impact from HB 1545 continues to be measured by Texas’ craft beer industry, it’s clear that the hundreds of breweries across the state are eagerly taking advantage of their new Texas beer-to-go capability, and with the gratitude of customers across the country.

Brewery owners are also looking forward to the end of lesser-known regulations, which are scheduled to sunset over the next two years thanks to the same piece of legislation.

Rules that make Texas one of only five states with a label approval process, in excess of federal obligations, will end in 2020.

Additionally, arbitrary complications that result from beers with an alcohol content above five percent will no longer be governed differently than beers with a lower percentage.

With their primary legislative goal now realized, DeBower expects his role for the next session will focus on saying “thank you” to the supporters who helped secure the win.

And, don’t be surprised if he encourages them to stop by Austin Beer Works to pick up some Peacemaker before heading back to their districts.