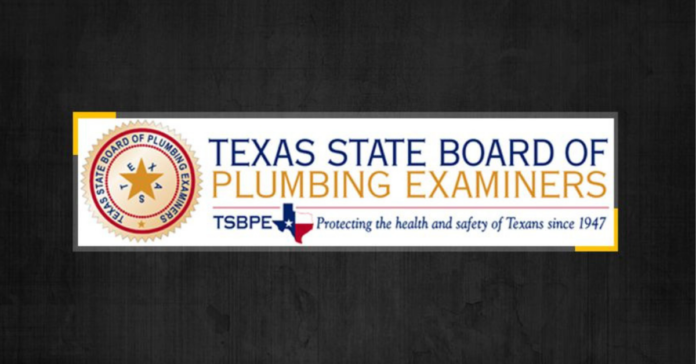 The state agency that regulates Texas plumbers is set to begin a “wind down” period and is scheduled to be abolished in 2020 after state lawmakers failed to pass legislation Sunday that would have extended the agency’s existence.

But there will be little for the agency to do after September. Lawmakers on Sunday also nixed the portion of state code that gives the state authority to regulate the plumbing profession. It’s possible cities and counties could instead oversee plumbing, lawmakers said.

The Texas State Board of Plumbing Examiners — responsible for licensing plumbers and enforcing plumbing law — was caught up in a legislative fiasco with lawmakers twice failing to pass the legislation that would have kept it going. It was also not saved via legislationknown as a “sunset safety net bill” that lawmakers pass each legislative session to keep a long list of state agencies from shutting down.

The agency was up for what’s known as the sunset review process, through which lawmakers periodically make assessments on how efficiently state agencies are being run and whether they should continue to exist.

Lawmakers on the Sunset Advisory Commission pitched transferring the plumbing board to the Texas Department of Licensing and Regulation, a broader agency that oversees more than two dozen professions. The commission’s review found it took up to eight months to receive a plumbing license from the plumbing board at a time when the state and the nation are facing a workforce shortage of plumbers. The Texas Department of Licensing and Regulation estimated it could reduce that wait time to a matter of weeks.

But lawmakers were split on the timing of that move.

When legislation that called for the transfercame up in the House, state Rep. Senfronia Thompson, D-Houston, amended the measure, Senate Bill 621,so that the move would not take place until 2021. But that language was removed when a committee of Senate and House lawmakers met to hash out the different versions of the bill approved by each chamber.

On Sunday night, Thompson objected to the change and asked her colleagues to reject the final version of the legislation so the plumbing board would not be reviewed again in two years when the licensing and regulation department was up for sunset. She chided the Senate for running over House lawmakers “because they don’t think we’re intelligent enough to make decisions on our own.”

“How many people in your districts have told you that because of what has been going on for the last several years that they got poop running out of their house and all over the streets?” Thompson said. “Nobody in your district has been telling you that. But they’ve been telling you they need plumbers, they need to be independent and all we’re doing is giving them the independence that we created.”

State Rep. Chris Paddie, a Marshall Republican who is the vice chair of the Sunset Advisory Committee, asked the House to sign off on the bill, pointing to separate legislation that would push the plumbing board’s next review to 2023.

“If this bill does not pass, what happens is they fall under the safety net, which means they immediately go into sunset review again,” Paddie said.

It came up again three hours later with Paddie asking his colleagues to reconsider their votes. He noted he had failed to give the House crucial information — there was actually no safety net in place, so the House had gutted both the agency and the plumbing code.

“Congratulations to us all because our plumbing shortage is solved because we can all become plumbers,” Paddie said.

The legislation was shot down again, this time on a 78-68 vote.

The plumbers board is now heading toward what’s known as a “wind down” period, which gives it until Sept. 1, 2020, to wrap up its operations, said Jennifer Jones, executive director of the Sunset Advisory Commission. The plumbing code, which regulates everything from plumbers’ insurance to the standards they must follow, expires in September, but Paddie said individual municipalities will likely still be able to regulate plumbers under local regulations.