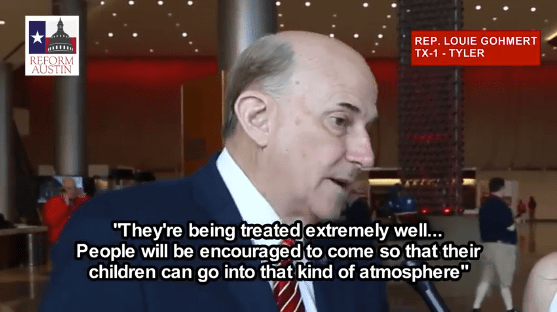 As a large amount of Texans continue to be horrified by U.S. President Donald Trump’s policy of separating undocumented immigrant children from their parents, there’s at least one politician in the Lone Star State who believes the practice is not only good for kids, but may spur more people to cross the border.
“There may be an isolated case…they’re being treated very well,” U.S. Rep. Louie Gohmert told Reform Austin. “The food they’re getting, the education, the exposure…There’s the possibility that people will be encouraged to come so their children can go into that kind of atmosphere.”

Gohmert’s comments come on the heels of a Bexar County sheriff’s deputy who is accused “of threatening an undocumented immigrant with deportation and of sexually assaulting her 4-year-old daughter,” reports the San Antonio Express-News.

Gohmert cited the Bible as justification to separate immigrant children from their parents. He used the analogy of U.S. citizens who break the law, stating they are taken away from their families when arrested.

“Look at Romans 13: The government is there to encourage good conduct, to encourage following the law,” he said. “But if you don’t follow the law, you’re supposed to be afraid because if it’s an honest, honorable person serving in the government, they’re going to enforce the law.”

Gohmert is just one of many Texas politicians who have compared the undocumented immigrants entering through the U.S.-Mexico border to U.S. citizens who commit crimes and are jailed away from their families.

If you’re a mother and you go rob a store and you got a child with you, you know what they do? They separate you and your child,” said State Rep. Matt Schaefer (R-Tyler). “So when a crime is committed, that is what is happening. Now, when you have a case where a family is doing something that puts their child in danger, that’s the problem. It’s not a simple answer.”

“If you’re breaking the law, they’re treated like lawbreakers because they are,” Huffines said. “They’re not going to be treated any different.”

Deanna Metzger, a Republican candidate for Texas House District 107 in Mesquite and northeast Dallas County, denied the view that detaining children from their parents should be viewed as a humanitarian crisis.

“This is not a humanitarian issue,” Metzger said. “And any time by the way, you hear somebody who’s using an emotional argument, it’s typically because the logic fails.”
Trump on Wednesday announced that he was signing an executive order on Wednesday that prohibits separating immigrant families, reports CNN and other news outlets.

The reversal comes after Audio of wailing children drew further condemnation from people around the country. General Michael Hayden, former director of the CIA and NSA, compared the encampment of the children to Nazi concentration camps.