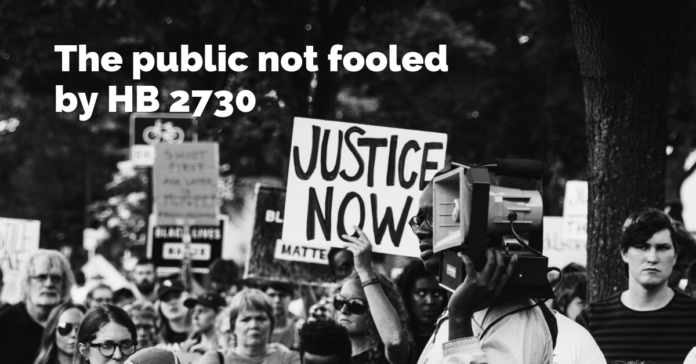 HB 2730, a bill filed by Rep. Jeff Leach (R-Plano), threatens to gut the public’s freedom of speech under the anti-SLAPP law, which protects citizens from being sued by large corporations for defamation.  Forty-five people gave testimony on Monday, April Fool’s Day, with nearly half testifying they were not falling for Leach’s bill.
The anti-SLAPP law, also known as the Texas Citizens Participation Act (TCPA), passed in 2011, protects first amendment rights, public participation and the media.
Leach, Chairman of the Committee on Judiciary & Civil Jurisprudence, says the proposed amendments he made in February of 2019 were to better refine the bill.
But according to Texas judges and lawmakers, portions of the bill are so broad, it essentially gives attorneys the ability to poke holes in numerous cases and exploits frivolous matters in the judicial system.
Justice Scott Field, a witness who attended the hearing said that “instead of lawmakers using the language in the constitution to define ‘free speech,’ ‘right of association,’ and ‘right to petition,’ they wrote their own definitions.”
Other witnesses in favor of the bill say they fully support the right to protect the public’s constitutional rights, but that the scope needs to be narrowed as it relates to how the definition is being used in the court of law.
Those in opposition to HB 2730 repeatedly defied the ambiguity of the definition of a “matter of public concern”, citing its obscurity could mean virtually anything. One witness, a representative from Yelp, also indicated that platforms allowing consumer reviews must also be protected, adding that consumers should not be at risk of being sued simply because they left a bad review. It is not clear how these companies are protected under the current bill.
The bill is expected to be left pending in the Committee. Leach indicated he will work on redefining the language this week based on the public feedback he received.