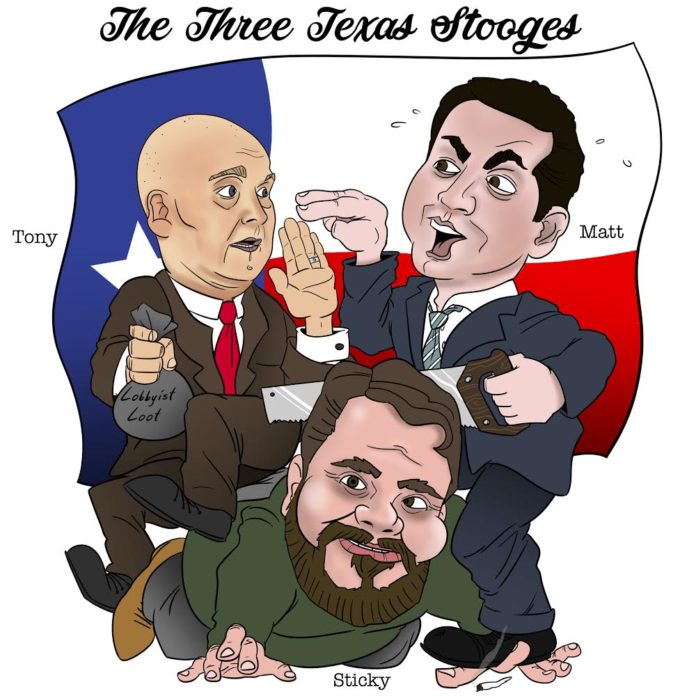 Reform Austin has written previously about a trio of North Texas legislators and their embarrassing antics as members of the Texas House of Representatives.
Rep. Matt Rinaldi (R-Irving) touts his record of passing positive legislation for Texas. In fact, Rinaldi threatened to put a bullet in a colleague’s head on the House floor, and voted to protect massage parlors that serve as fronts for sex trafficking.
Rep. Tony Tinderholt (R-Arlington), who calls himself a taxpayer champion, has a terrible history with money and allowed an underage employee to be served alcohol, who then had an accident causing serious injuries.
Rep. Jonathan Stickland (R-Bedford) says the family is the foundation of society and promotes personal responsibility and accountability. Yet Stickland was the only member of the Texas House to vote against criminalizing “revenge porn”, and previously claimed that rape is non existent in marriage.”
The individual conduct of each of these legislators is bad enough, but together they are a toxic trio in the Texas House. Prioritizing sex offenders over victims, voting against access to mental health services and against ethics reform are just a few examples of the Three Stooges’ embarrassing routine.
It’s time for the Larry, Curly and Moe of Texas politics to clean up their act or take it elsewhere.