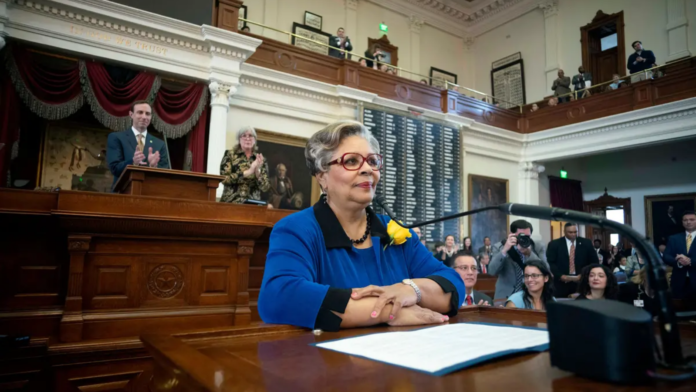 State Rep. Senfronia Thompson, the longest-serving woman and Black person in the history of the Texas Legislature, filed Friday to run for speaker of the Texas House, making her the first to enter what’s been a quiet race so far to replace retiring Speaker Dennis Bonnen, R-Angleton.

Thompson, a Houston Democrat, has filed ahead of a November general election in which Democrats are confident they will regain control of the House for the first time in nearly two decades. If elected, she would be the first Black woman to serve as speaker.

Thompson’soffice did not immediately respond to a request for comment.

Thompson is not the only candidate expected to enter the race, which has had a different tempo and tone from the last one in 2018. The uncertainty surrounding which party will be in control of the lower chamber in 2021 has kept the race relatively quiet; by this time two years ago, several candidates had already declared that they were seeking the gavel.

After Bonnen, mired in a political scandal, announced his retirement last year, speculation began over who would replace the one-term speaker.

Thompson, known better as “Ms. T” to colleagues and other Capitol goers, has served in the chamber since 1973, making her the second longest-serving member in the House. She has been mentioned repeatedly among both Republicans and Democrats as a potential candidate, with members pointing to her legislative experience and inroads with colleagues as perhaps her best case for a House that has a challenging agenda heading into the 2021 legislative session.

That 140-day stretch, set to begin in January, will all but certainly feature tough debates about the millions of dollars in shortfalls projected to the state budget, responding to the ongoing coronavirus pandemic and redrawing the state’s political maps. One of the first pieces of business for the 150-member House will be to elect a new leader.