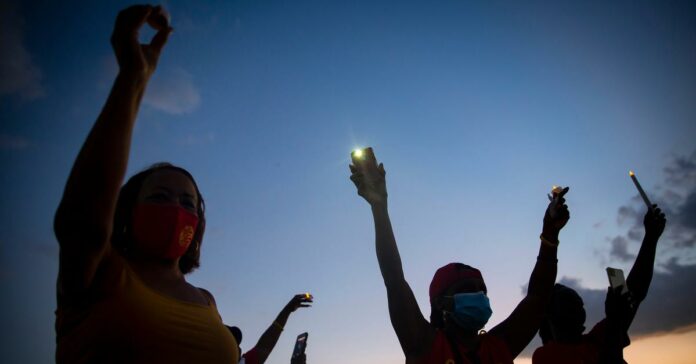 A year ago, longtime Houston resident George Floyd was murdered by a Minneapolis police officer. Texas Gov. Greg Abbott promised his death would not be in vain.

Weeks after the Black man was killed, the governor said that he was committed to working with Floyd’s family and suggested a possible George Floyd Act “to make sure that we prevent police brutality like this from happening in the future in Texas.”

The Texas Legislative Black Caucus jumped at the call, unveiling in August a police reform proposal named after Floyd. The legislation included some targeted provisions specific to Floyd’s death, such as limiting police chokeholds and requiring officers to intervene if a fellow officer is using excessive force. But it also had more substantive measures, like requiring agencies to adopt use-of-force policies that emphasize deescalation and taking away police officers’ qualified immunity, a legal shield from state civil rights lawsuits.

By Tuesday — the anniversary of Floyd’s murder — a few of the narrowly targeted pieces with police union support were expected to be signed into law. But most of the measures in Texas’ George Floyd Act had failed to progress in the legislative session that ends Monday.

The sweeping reform bill named in honor of Floyd never made it past its first committee hearing.

“The Texas Legislature is saying Black lives don’t matter,” said Durrel Douglas, an organizer and executive director of Houston Justice, on Monday. “It’s really sad that this is where we are. I think it’s a litmus test for where we are as a society: the fact that something so simple is an uphill battle.

Before Monday night, the only bill that had gotten approval from both chambers was one to require officers to give first aid to injured people, if they safely can.

A bystander’s video of Floyd’s death was the catalyst for nationwide protests against police violence and deafening calls for systemic changes to policing practices and accountability that lasted for months after Floyd’s death. But not long after the legislative session began in January, it became apparent that the omnibus House Bill 88 named after Floyd would not succeed. Removing police officers’ legal shield against lawsuits quickly became a sticking point among legislators who largely stand behind police unions and officials. Policing groups argued nixing that qualified immunity would cause officers to quit in droves and and put all the blame for misconduct on individual officers, even if they were following bad policy.

Instead, some standalone bills that addressed individual proposals in the George Floyd Act began to wind through the Texas Capitol.

The Senate passed three smaller measures that had support from police unions: the bill to render first aid and call for emergency services, another to ban police chokeholds unless it’s necessary to prevent serious injury or death and one that would require officers to intervene if another was using illegal force.

The House passed the first Senate measure on Sunday, setting it up to be sent to the governor’s desk and signed into law. The chamber tentatively approved the other two provisions Monday night, merging them both into one bill. That measure will still need to be passed once more in the House before being sent back to the Senate, which can either sign off on the changes or enter into negotiations.

Three bills originally passed by the House, however, have had no luck in the Senate. They would require Texas law enforcement agencies to implement more uniform and substantive disciplinary actions for officer misconduct, bar officers from arresting people for fine-only traffic offenses and require corroboration of undercover officer testimony in drug cases. At least two other standalone House bills, on officers’ legal shield against lawsuits and use of force policies that focus on deescalation tactics, failed in House committees.

After the bills passed by the House were sent to the Senate Jurisprudence Committee earlier this month — the same one that approved its chamber’s policing reforms — none were brought up by committee chair state Sen. Joan Huffman, R-Houston. A bipartisan group of House lawmakers have been trying for years to limit police ability to arrest people for crimes that at most would result in a fine, not jail time.

On Monday, Huffman said in a statement that the Senate had worked diligently on criminal justice reform issues, including the George Floyd Act provisions passed by her committee. She noted her committee also approved a bill to train police to intervene in illegal force, render aid and not use chokeholds. House Bill 3712 has not yet been passed by the Senate.

“I am proud of the work that the Senate has done this session, and while there were other bills that did not have the votes to pass, I am hopeful that these bills will continue to strengthen the crucial relationship between law enforcement officers and the communities they serve,” Huffman said.

State Sen. Royce West, who carried some of the standalone Floyd provisions, believes the Senate bills will be signed into law. But he said the House measures on discipline, fine-only arrests and testimony corroboration would not pass this session.

“Obviously we wanted to pass the bill in the name of George Floyd, but Republican colleagues were not agreeable to that,” the Dallas Democrat said Monday. “If people want to get those reforms through, then they’re going to have to [elect] people who will vote for those reforms.”

With deadlines fast approaching and the session’s finale days away, Douglas said Monday it was insulting that the only bill that had finally passed both chambers was one to tell officers to help injured people.

“One would assume that someone who took an oath to protect and serve would automatically do that,” he said.

After the former police officer who killed Floyd was convicted of murder last month, relatives of Texans killed by police found renewed hope that their Legislature would make real change, reasoning that if that outcome didn’t propel reform, nothing would. Gary Bledsoe, president of the Texas NAACP, had a more cautious outlook at the time, but ultimately was still disappointed.

“Once again Texas seems to not be standing with those around the world that are moving in a positive direction and addressing the issue of race, particularly in terms of criminal justice,” he said Monday. “There’s going to be blood on your hands when you had the power to change it.”

Texas itself has had several high-profile instances of police killing Black and Hispanic people in recent years.

Mike Ramos in Austin was killed a month before Floyd while unarmed and driving away from police. In Fort Worth, Atatiana Jefferson was shot through her bedroom window in 2019 after police arrived for a welfare check. Her family’s lawyer said she was playing video games with her nephew at the time. The officers who killed Ramos and Jefferson have both been charged with murder.

In Dallas County, three former police officers have been convicted of murder since 2018 for killing 16-year-old Jose Cruz, 15-year-old Jordan Edwards and 26-year-old Botham Jean in unrelated incidents. Cruz was running away from an off-duty officer who said he was breaking into his car; Edwards was a passenger in a car moving away from police; Jean was simply in his apartment when an officer said she mistook it for her own.

Since Floyd’s death last May, Texas police have shot more than 140 people, killing at least 86, according to the Texas Justice Initiative’s analysis of state reports. Though Texas’ population is 12% Black, 24% of those shot were Black.

But the political conversation in Texas largely shifted away from police reforms when calls for change coincided with efforts to cut police funding and instead shift city money into other social services.

Last fall, the Austin City Council responded to the calls by immediately cutting the police department’s funds by about 7%, or $31 million and put money toward things like housing and mental health. A larger portion of the police budget was put into transitionary funds to shift some police duties into civilian city jobs, like operating crime labs, and evaluate if more responsibilities could be transferred in the future.

The immediate cuts were largely made by eliminating vacant positions, cutting some overtime funds and delaying new cadet classes, which were already on hold while the city awaited audits that have since reported “significant racial and gender disparities” in Austin police training.

Still, state leaders began to focus all of their attention on maintaining local police funding, and the discussion on police reforms faded from the political sphere. Abbott called on Texas political candidates to sign pledges to “back the blue,” and he made halting “defunding” efforts an emergency item for lawmakers this year.

On Monday, the Texas House and Senate collectively advanced two separate proposals that aim to stop the state’s most populous cities and counties from cutting law enforcement funding. Abbott is expected to sign both.

Texas lawmakers have sent one bill to the governor related to protests spurred by Floyd’s death. House Bill 9, which Abbott has said he will sign into law, would raise criminal penalties and require jail time for protesters who obstruct a roadway if it prevents the passage of an emergency vehicle or blocks a hospital entrance.