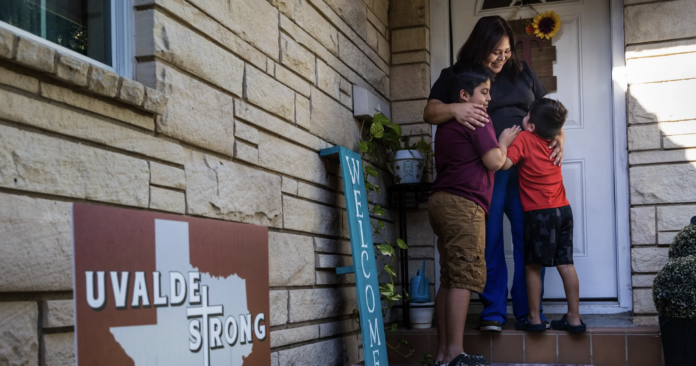 UVALDE — Brianna Gonzales, fresh off her nursing shift, sat quietly alongside her two sons in Uvalde High School’s auditorium this past week as school district officials laid out for parents new safety measures for the upcoming school year.

Gonzales has decided to keep her two sons, a kindergartner and a fifth grader, in the district. But it wasn’t the easiest decision. Her oldest was at Robb Elementary on May 24, the day an armed teenager entered the school and killed two teachers and 19 children. Fortunately, she had taken her son home before the shooter entered the building.

But a summer of conflicting government narratives has set Uvalde parents on edge, particularly after a state report showed that 376 law enforcement officers showed up at Robb on May 24 but did not engage the shooter for more than an hour.

Parents are now trying to plan for the back-to-school season and facing tough choices over their children’s education and safety. Some are keeping their kids in the Uvalde Consolidated Independent School District when school starts on Sept. 6. Some are choosing homeschooling and others are looking at private schools.

Gonzales, like other parents in this working-class community, doesn’t have the time or money to look for other options right now. She has a full-time job and she’s usually up earlier to get herself and her kids ready for the day. Their dad works out of town and is usually home only during the weekends, she said. That rules out trying to get her kids to nearby districts or pay for private school or even consider online school.

“COVID affected them a lot and I saw how that affected their education and I don’t want them to have to go to virtual again,” she said. “I don’t have the time of day to do things with them for school so I feel like I would be failing them on that part of their education.”

At least in Uvalde, she said, the district is working toward making the school more secure as the first day approaches.

In the high school auditorium, the Uvalde schools superintendent, Hal Harrell, laid out for parents and students the district’s plans to make schools here secure as well as offer more access to mental health resources. He discussed the district’s partnership with Texas Child Health Access Through Telemedicine, also known as TCHATT, which helps identify behavioral health needs of children and adolescents.

The district is also contracting Rhithm, a company with an app that allows staff and students to log how they are feeling. Communities in Schools, a nonprofit organization focused on connecting students with resources, is also sending teams to the district to provide additional behavioral health support to students.

The district is upgrading security on its seven campuses. Fencing is being installed at some schools. But Harrell couldn’t promise that Uvalde High School would be secure with fencing before the first day because of the sheer size and openness of that campus.

There will be 33 Texas Department of Public Safety officers deployed across the Uvalde school district throughout the school year. The district is also accepting applications for campus monitors, who would check locks on doors and gates and provide reports to the administration. Some 500 cameras will be installed at campuses before the first day of school.

The district has spent about $4.5 million so far in security upgrades, with some of the money coming from donations and grants.

Uvalde CISD will offer an online option for students who want to stay in the district but not attend in-person classroom instruction. Students who opt for online instruction will receive brand-new iPads, Harrell said.

The Texas Education Agency is in the process of approving Uvalde’s virtual school and making sure it complies with Senate Bill 15, the virtual education bill that passed during last year’s second special session.

The bill also caps the number of students in the district that can be enrolled in a district’s online alternative. The school district will need a waiver from TEA if more than 10% of all enrolled students want to be in the online school.

But for Gonzales, Uvalde’s new security plans seem to satisfy her, and her children will return to the district’s in-person classes.

“[Uvalde is] implementing new security features, having the troopers there — that brings another sense of added security,” she said.

Gonzales made the decision two weeks ago to send her kids back to Uvalde CISD. It’s something that parents here don’t usually question in this small town of 15,000, about 85 miles west of San Antonio, she said.

As a lifelong Uvalde resident, Gonzales wanted her children to have the same experience she did attending district schools. She also wants her children to regain a sense of normalcy after two years of school disruption from the pandemic.

But as a result of the shooting, Gonzales still has a sense of fear and concern as the first day approaches. She bought her oldest son, who is 10, a cellphone. She hadn’t planned to get him a phone until he was 13. She also plans to buy them bulletproof backpacks, which she sees as an investment.

“Last year it was just ‘I have to buy school clothes’ and that was it,” she said. “This year is completely different.”

Adam Martinez, the father of two students, will send his kids to the online school that Uvalde is offering. It wasn’t his first choice but as he spoke with his kids, it was obvious they were still scared. https://content.jwplatform.com/players/Ie8Rfil6-p2qTUist.html

Adam Martinez, an Uvalde father of two, will send both of his children to the district’s virtual school. Credit: Jinitzail Hernández/The Texas Tribune

Having trouble viewing? Watch this video on texastribune.org.

“I was telling my son, ‘there’s gonna be a tall fence, and they’re gonna have state troopers on all the locations,’” Martinez said. “And he told me, ‘Who cares if there’s cops? They’re not going to do anything anyway, they’re scared.’”

Others, though, still have not regained the trust of the school district. Angeli Gomez, a parent who had two children at Robb the day of the shooting, was handcuffed that day trying to get answers from law enforcement about her children.

Now, she and 19 other women have been in touch with a woman in San Marcos who has offered to homeschool their children for free.

Uvalde’s mayor has said Robb Elementary will be demolished and another school will be built in its place. But until that happens, no student will have to return to the school. Instead, students will be spread out to different Uvalde CISD campuses.

One of those is Flores Elementary. Gomez doesn’t think it’s a good idea to transfer the children from Robb there.

“They’re trying to stuff our kids — third, fourth, fifth and sixth [grade] — in Flores, since they want to demolish Robb, but Flores won’t fit our kids,” she said. “We’re gonna have, what, 33 kids in a class? They’re not gonna pay attention or learn.”

Jeremy Newman, deputy director of the Texas Home School Coalition, advised that parents considering withdrawing their kids from the public school system in favor of homeschooling don’t need to recreate what a public school does.

“People feel like they have to be a master in all academic subjects,” Newman said. “The parent’s job is not as much to transfer knowledge from their head to the students’ head as it is for them to provide a learning environment where the student wants to learn.”

For people who haven’t been in charge of homeschooling their child, it can be an overwhelming task to find the right resources for their child. Newman suggests they contact his group, which helps families who have always homeschooled or those who are just starting out.

The number of families homeschooling at least one child has tripled in Texas since the start of the pandemic, Newman said. According to Texas Education Agency data, nearly 30,000 students between grades 7-12 withdrew from Texas public schools to homeschool in the 2020-2021 school semester, a 40% increase over the prior year.

Topping the reasons people are choosing homeschooling are safety and academics, he said.

Still other Uvalde parents will send their children to Sacred Heart Catholic School, one of three private schools in the city. Principal Joseph Olan said interest in his school has increased from previous years. During the last school year, he had about 55 students enrolled. This year, that number has ballooned to 120, and he expects it to grow as the school year goes on.

The school has received donations to put up a fence around the campus, bulletproof the windows and door and install a new security camera system.

“These are the primary reasons why families are coming,” Olan said.

It’s not clear how many students Uvalde CISD will be losing this next school year. In Texas, schools are funded based on the number of students enrolled and the daily attendance on campus. Schools receive a base allotment of $6,160 per student each year. Any dip in enrollment means less money for the school district.

Diana Olvedo-Karau, who works in the school district’s transportation department, said homeschooling in Uvalde has not been common. But more people are talking about it now.

Olvedo-Karau is concerned over the funding the district will lose if children are pulled out, but she understands why parents might do it.

Uvalde school officials did not immediately respond to The Texas Tribune’s request for enrollment numbers for this upcoming school year. https://content.jwplatform.com/players/34SbepfB-p2qTUist.html

Tina Quintanilla, an Uvalde mother of two, will send her daughter to online school out of the district and is still searching for a school for her son. Credit: Jinitzail Hernández/The Texas Tribune

Having trouble viewing? Watch this video on texastribune.org.

Uvalde parent Tina Quintanilla, 41, plans to use a private online school company, K12, for her daughter’s instruction this next year. She also has a son who requires special education classes, and she still hasn’t found a school for him. Quintanilla is a graduate of Uvalde High School, home of the “Fighting Coyotes & Lobos,” so the decision to look at alternatives wasn’t easy.