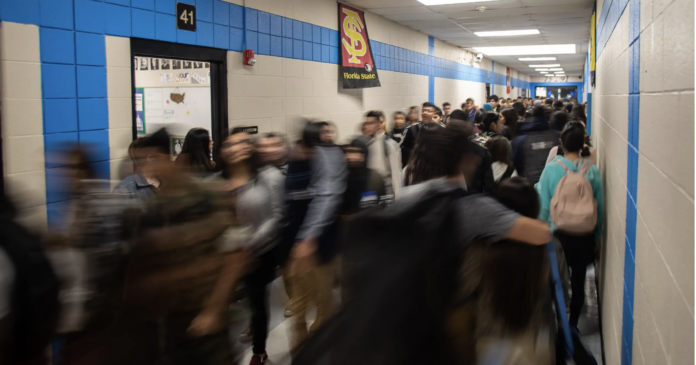 For the past year, Texas educators have struggled with a new law targeting how history and race are taught in the state’s public schools.

Some administrators thought it meant they needed to teach an opposing view of the Holocaust. For other school officials, the pressure of adhering to new restrictions about how to teach social studies was too much and for some it was the last straw: They quit. In one district, a Black principal was put on paid leave after being accused of teaching critical race theory, which he denied doing. He eventually reached a settlement with the district and resigned.

Now, eight months after the enactment of a law designed to de-emphasize the role of slavery and racism in American history in Texas social studies classes, state Sen. Bryan Hughes, R-Mineola, the author of the state’s so-called “critical race theory” law, appeared before the State Board of Education in an attempt to offer better guidance about the law he helped craft.

“That bill is not an attempt to sanitize or to teach our history in any other way than the truth — the good, the bad and the ugly — and those difficult things that we’ve been through and those things we’ve overcome,” Hughes said. “No one is saying that we don’t have systemic racism. But what we’re saying is, we’ve made a lot of progress. We have a long way to go. But the way to get there is to come together as Americans.”

His testimony came as the board was considering how to update the state’s social studies curriculum standards, known as the Texas Essential Knowledge and Skills, or the TEKS. It’s a process done every eight years for the state’s 5.5 million public school students.

The drafts of the updated curriculum are available online. Some changes being considered include the addition of a course on personal financial literacy and separate courses that focus on Asian and Native Americans. The SBOE will have a final vote on adopting the drafts in November and can choose to amend them.

Hughes’ appearance before the 15-member board was the first before the group since the law went into effect last December. He clarified that the intent of the law, also known as Senate Bill 3, was to make sure that no student comes away from class feeling guilty about the roles of their ancestors.

“We still teach that really bad things were done by people of particular races, and it may be that in teaching those things, students may feel guilty about that,” Hughes said. “What we’re saying is you don’t say, ‘Little Johnny, little Jimmy, you should feel bad because of what your forebears did.’”

Over the past year, conservative lawmakers have been focused on critical race theory, a university-level approach that examines how racism is embedded in all aspects of society. The term used by conservatives as a catch-all phrase to include anything about race taught or discussed in public secondary schools even though it is not taught in Texas schools.

The law — and the political rhetoric — has resulted in calls for greater scrutiny not only on what is taught but what information students should have access to when it comes to sex, gender and race. Last year, state Rep. Matt Krause asked that an investigation be conducted into which schools had books from a list of 850 titles that were mostly about race and LGBTQ issues.

SB 3 was the state’s second attempt in a year to curb how social studies classes are conducted in Texas. It replaced an earlier bill, House Bill 3979, which was passed in June 2021. At the time, Gov. Greg Abbott said more needed to be done to “abolish” critical race theory in Texas classrooms, and lawmakers went to work to craft a more restrictive measure. The result was SB 3.

Hughes backed education board chair Keven Ellis, a Republican, when Ellis said that it’s the job of the state board to determine what is taught, not the law.

Board member Aicha Davis, a Democrat, told Hughes that his law had already caused damage to the public school system and questioned if the lawmaker consulted with teachers and teacher groups before authoring the bill.

“We always talk about teachers leaving in droves and this was one of the reasons,” Davis said. “Teachers were literally scared to teach even the TEKS that existed because of this.”

During public comments, response to the board’s proposed standards were overall positive. There was one suggestion to change the term “internment” to “incarceration” when talking about how Japanese Americans were forced from their homes after the Pearl Harbor attack and detained by the federal government. There was also a call from some for more inclusion of Asian Americans in Texas social studies curriculum.

“I’m a Muslim American student,” said Ayaan Moledina, who testified on Monday. “Every year in school, we watched the same video about 9/11. Never ever has one of my teachers talked about the hate that has been directed towards Muslim Americans after 9/11. It is beyond me how this would be so controversial. Is having empathy controversial?”

Over the last year, there has been debate over whether SB 3 would affect the revision process, and until now, the drafts are pretty inclusive, said Chloe Latham Sikes, deputy director of policy at the Intercultural Development Research Association.

“This was a really good foundation for [the board] to start adopting standards,” Sikes said.

Carisa Lopez, senior political director at the Texas Freedom Network, a left-leaning watchdog group often involved in public education issues, said she likes the direction so far the board is taking. But she and others want to see whether board members make later additions before November.

There were some against the proposed curriculum, because they viewed them as anti-American.

“The changes I have seen so far, they’re anti-America and anti-Christian,” said Jackie Basinger, chair for the chapter of Moms for Liberty in Travis County. “Inequalities will exist as long as there are lazy people.”

Disclosure: Texas Freedom Network has been a financial supporter of The Texas Tribune, a nonprofit, nonpartisan news organization that is funded in part by donations from members, foundations and corporate sponsors. Financial supporters play no role in the Tribune’s journalism. Find a complete list of them here.