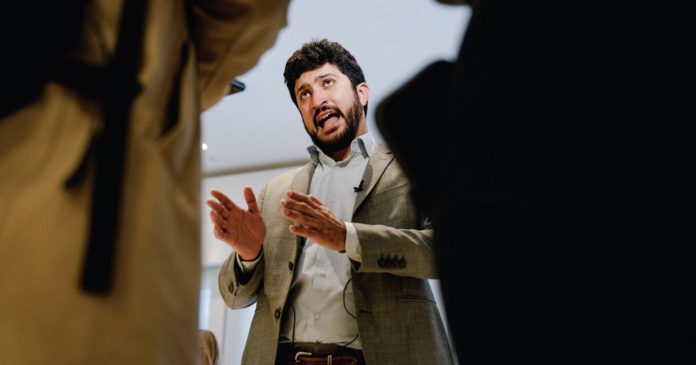 As authorities continue to release more information on alleged crimes by cryptocurrency exchange founder Sam Bankman-Fried and his associates, Texas politicians who received donations from FTX affiliates are scrambling to give back the money.

Earlier this month, The Texas Tribune reported that Beto O’Rourke had returned a $1 million donation that Bankman-Fried had given his campaign. The campaign also received $100,000 from Nishad Singh, another FTX executive. The campaign has not said whether it also returned that donation.

On Wednesday, U.S. Rep.-elect Greg Casar said he would give away nearly $7,000 in donations from people associated with Bankman-Fried and FTX. The Austin Democrat received $3,900 from Gabriel Bankman-Fried, the FTX CEO’s brother, and $2,900 from Singh, for a total of $6,800. The campaign said it would give a donation in that amount to the advocacy group Fight Corporate Monopolies.

That came after federal authorities arrested Sam Bankman-Fried on Monday in the Bahamas and charged him with crimes in federal court. The complaint against Bankman-Fried also alluded to co-conspirators, which has pushed more Texas politicians to try to offload the money.

On Thursday, U.S. Rep.-elect Monica De La Cruz’s campaign said she would be donating $1,000 she received from Ryan Salame, an FTX executive who donated heavily to Republican candidates. The South Texas Republican’s campaign said the money would be given to the family of Raul Gonzalez, a U.S. Border Patrol agent who died this month in an ATV crash while pursuing migrants on the border.

On Friday, U.S. Rep. Tony Gonzales, R-San Antonio, said on Twitter he’d give away $2,900 his campaign had received from Salame.

“If a thief randomly contributes $2,900 to you online,” he said, “I recommend donating the money to the Border Patrol Foundation like I did.”

Others who received money from Salame have said they plan to give the money away but haven’t decided where they will send it. That’s the case for U.S. Reps. John Carter, R-Round Rock, and Kay Granger, R-Fort Worth, according to The Dallas Morning News.

But not all the recipients of the money are clamoring to give it back. Justin Discigil, an aide for U.S. Rep. Dan Crenshaw, R-Houston, told The Dallas Morning News, “We can’t do a background check on everyone or assess their networks or affiliations. It’s ridiculous to think so. And return the donation? You’re suggesting we write a check to someone affiliated with FTX? No.”

Just one month ago, Bankman-Fried was considered a cryptocurrency whiz kid and was seen as one of the only leaders in that industry pushing for government regulation. Then his company, which was valued at $32 billion, fell apart within a matter of days. Federal authorities are investigating whether he diverted funds from FTX to a sister company, Alameda Research, and used the money for political donations.

Other Texas politicians who have not said what they’re doing with the FTX-affiliated donations include U.S. Rep. Ronny Jackson, R-Amarillo; U.S. Rep. Michael Burgess, R-Lewisville; and U.S. Rep. Henry Cuellar, D-Laredo, who received financial support for his campaign from America United, a political action committee backed by Bankman-Fried, according to The Dallas Morning News.