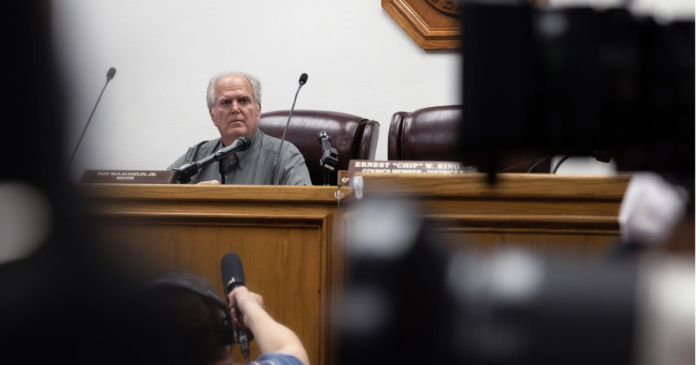 UVALDE — At an emotional City Council meeting Thursday, families of the Robb Elementary School shooting victims demanded the mayor release details from the investigation. Mayor Don McLaughlin told them he didn’t have any new information and the city can’t share anything with the public because of the ongoing investigation.

“Nobody’s giving us any answers, it’s been over a month, you have no idea how frustrating that is. We’re sitting here, just listening to empty words,” said the sister of Irma Garcia, one of two teachers who was killed in the May 24 massacre along with 19 students. She didn’t identify herself by name when she addressed the City Council.

Tina Quintanilla-Taylor, whose daughter survived the shooting, also made a plea to state leaders who have details of the investigation and haven’t shared them with the community: “Show your face. Answer our questions, now,” she said, facing TV news cameras.

Some family members also demanded to know why Pete Arredondo, a City Council member and school district police chief whose actions during the shooting have brought withering criticism, failed to show up to his second consecutive City Council meeting. According to the city charter, the City Council could vacate the seat if Arredondo misses a third consecutive meeting.

McLaughlin told family members that if city officials released details about the shooting investigation, they could be prosecuted, citing letters from the Texas Department of Public Safety and Uvalde County District Attorney Christina Mitchell Busbee requesting that no information be released until the investigation is complete.

The shooting is being investigated by the Texas Rangers, who are part of DPS, and the FBI.

In the letter dated June 8, Busbee does not mention prosecuting anyone, but says that “Any release of records to that incident at this time would interfere with said ongoing investigation and would impede a thorough and complete investigation.”

The shooting by an 18-year-old Uvalde man — who was killed by law enforcement after they waited more than an hour to confront the shooter — is the worst K-12 school shooting in the country since a gunman killed 20 children and six adults at Sandy Hook Elementary School in Newtown, Connecticut, in 2012.

The aftermath has brought anguished questions from parents and residents who are demanding answers, as well as finger-pointing between state and local officials over what most law enforcement experts agree was a botched response by police as children were being slain inside the school.

During the council meeting, family members discussed the idea of starting an effort to recall Busbee. McLaughlin also offered to resign if Uvalde residents felt he wasn’t doing his job

“I’m not a quitter. But if this community feels like I haven’t done a good job as mayor and they want me to resign, I’d be happy to,” he said.

The meeting came as a state House committee held its second straight day of private interviews as part of an investigation of the shooting. The committee, which is chaired by state Rep. Dustin Burrows, R-Lubbock, heard testimony from the mayor, teachers and Uvalde police and state police officers.

Burrows has said he believes witnesses would give more candid testimony away from the public eye.