Home Politics O’Rourke Calls Abbott A “Thug” And An “Authoritarian” Who’s “Got His Own...
Facebook
Twitter
Email 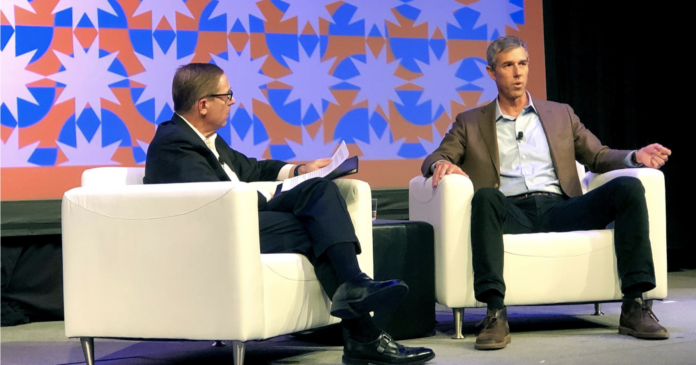 Beto O’Rourke, the Democratic nominee for Texas governor, called the Republican incumbent, Greg Abbott, a “a thug” and an “authoritarian” on Saturday and compared Texas energy executives to Russian oligarchs in a blistering critique that presages an election that is about eight months away.

“I just had a chance to meet with the ambassador from the EU,” O’Rourke told Evan Smith, the CEO and co-founder of The Texas Tribune, in a crowded hall at the South by Southwest festival. “We talked about the fact that you’re seeing the continued rise of authoritarians and thugs across the world. And we have our own, right here, in the state of Texas.”

Smith asked, “Greg Abbott is a thug in your mind?”

“Let me make the case. Not only could this guy, through his own incompetence, not keep the lights on in the energy capital of the planet last February, but when people like Kelcy Warren and other energy company CEOs made than $11 billion in profit over five days — selling gas for 200 times the going rate; not only did he not claw back those illegal profits; not only was there no justice for more than 700 people who were killed, who literally froze to deaths in their homes, outside, in their cars, people who are paying now tens of billions of dollars cumulatively to pay for the property damage that the flooding that ensued caused in their homes, but he’s taking millions of dollars in payoffs from these same people. I mean, he’s got his own oligarch here in the state of Texas.”

Abbott’s campaign said in a statement, “It’s unfortunate Beto O’Rourke continues to run a campaign based on fear mongering and tearing down Texas.”

Warren is the billionaire CEO of Dallas-based Energy Transfer, a pipeline giant that made an estimated $2.4 billion from skyrocketing natural gas prices during the February 2021 snowstorms, which knocked out electricity across much of the state.

Last month, Warren sued O’Rourke for defamation, which the candidate described as an effort to silence him. (Warren’s lawyers and spokespeople did not immediately respond to a request for comment.)

The state estimates that at least 246 people died in the snowstorms, though a BuzzFeed analysis found that the toll could be as high as 702. Last month, the state’s power grid manager testified in court that upon Abbott’s request, he kept wholesale electricity prices high in the latter days of the storm in an effort to prevent more rolling blackouts. That was done to incentivize companies to keep producing power. A spokesperson for Abbott said that was needed to “prevent the loss of life.”

It is difficult to assess which state makes voting most difficult, but Texas requires a photo ID, requires registration 30 days before an election, does not make online registration available and does not allow no-excuse early voting. It does allow two weeks of in-person early voting for all registered voters.

In the March 1 primary, which recorded fairly anemic turnout, more than 18,000 mail-ballots were rejected in 16 of the state’s largest counties for failing to meet the new law’s ID requirements.

O’Rourke, 49, represented El Paso for three terms in the U.S. House. He challenged U.S. Sen. Ted Cruz in 2018, losing by less than 3 percentage points, a remarkable showing in a state that hasn’t elected a Democrat statewide since 1994. In 2019, O’Rourke entered the race for Democratic nominee for president. He struggled to raise much money or get much attention and dropped out later that year.

When confronted with an audience question about why he “bomb[ed] out in 2020,” O’Rourke responded, “I think that’s a pretty accurate description.”

Smith, the moderator, drew attention to a line O’Rourke used in a Democratic presidential debate in September 2019, when he vowed, “Hell, yes, we’re going to take your AR-15, your AK-47. We’re not going to allow it to be used against our fellow Americans anymore.”

O’Rourke on Saturday dialed back somewhat from his earlier comments, saying that he still didn’t think ordinary citizens should own military-style weapons designed “to kill people on a battlefield,” but acknowledged that if elected he would face a stiff fight from the Legislature over gun rights. He vowed to “find common ground with Republicans on things like universal background checks, safe-storage laws, extreme-risk protection laws,” which allow judges to temporarily remove firearms from people who are at an elevated risk of harming themselves or others.

He added, “If I can find the consensus within the Legislature to have a law within the state of Texas that allows us to buy back the AR-15s and AK-47s, we will.” Texas last year began allowing people to carry a handgun without a license or training — even though most voters did not support such permitless carry. The prospects for a large-scale gun buyback would seem slim.

After the talk, Mark Miner, Abbott’s communications director, issued a statement pointing out discrepancies between O’Rourke’s comments on Saturday regarding gun buybacks, the “remain in Mexico” policy for asylum-seekers, and President Joe Biden and previous statements he’s made. (O’Rourke recently said he did not want any campaign assistance from Biden, but on Saturday insisted that “he is not a drag on anyone.”)

“It appears if you want Beto to tell the truth, you need to put him in front of out-of-state liberal elitists, not the people of Texas,” Miner said.

Asked whether Biden’s unpopularity in Texas might be a drag on Abbott’s prospects, O’Rourke said that he had been crisscrossing the state and hearing nothing from voters about Biden or his predecessor, President Donald Trump. Voters, he said, wanted to talk about higher utility bills, lack of broadband access in rural areas, the closings of rural hospitals, the state’s refusal to expand Medicaid and diminished spending on public education. He insisted that he would manage to activate first-time voters and energize young voters, two groups that helped propel his surprisingly close race in 2018.

O’Rourke, a supporter of abortion rights, condemned Texas’ near-total ban on abortions as well as recent legislation blocking transgender teenagers from participating in youth sports. He also condemned Abbott’s directive to start child-abuse investigations of families who seek gender-affirming care for their children.

Such controversies were a distraction, O’Rourke said, from a maternal mortality crisis; a shortage of preventive care for women, including cervical cancer screenings; and high rates of teen pregnancy and repeat teen pregnancy. People who see themselves as “pro-life,” he said, should pay attention to the state of the foster care system in Texas, citing a state-contracted facility in Bastrop where girls who had already been victims of sex trafficking were allegedly sexually abused yet again by staff. The shelter was ordered closed Friday.

An audience member asked O’Rourke for his views on marjiuana legalization. Abbott has suggested he would support decriminalization of possession of small amounts of marijuana. Texas remains a far cry from states like California where the sale and use of marijuana are fully legal.

O’Rourke drew laughter and applause when he said that bipartisan consensus might not be hard to coalesce on this issue, given that Republicans, too, like to get high.