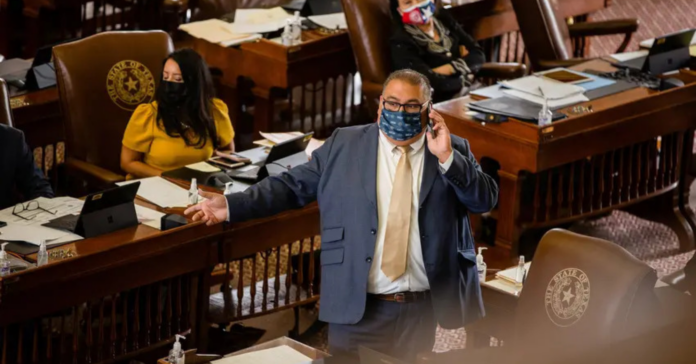 Longtime Democratic state Rep. Ryan Guillen of Rio Grande City is switching parties as Republicans press to make new inroads in South Texas and after redistricting made his district much more favorable to the GOP.

Guillen was set to make the announcement Monday morning during a news conference in Floresville where he was joined by Gov. Greg Abbott and House Speaker Dade Phelan, R-Beaumont.

“After much consideration and prayer with my family, I feel that my fiscally conservative, pro-business, and pro-life values are no longer in-step with the Democrat Party of today, and I am proudly running as a Republican to represent House District 31,” Guillen said in a statement.

Guillen’s decision to run for reelection under the GOP banner is a boon for Republicans who have been working to show new strength in South Texas after President Joe Biden underperformed there in 2020. The decision also comes after the GOP-led redistricting process turned Guillen’s district, already Republican-leaning, into a solidly red one.

The last state lawmaker to change parties was Rep. JM Lozano, R-Kingsville, in 2012. He was also a South Texas Democrat who made the decision to join the GOP after redistricting.

Guillen is already well-known as an outlier in his caucus. He is the least liberal Democrat in the House, according to rankings from Mark Jones, a political science professor at Rice University.

Guillen was one of seven House Democrats who voted earlier this year to allow permitless carry of handguns. He stayed behind this summer when most House Democrats fled to Washington, D.C., in protest of Republicans’ priority elections bill. And he was the only Democrat to vote last month for a bill preventing transgender students athletes from playing on teams that correspond with their gender identity.

Guillen, chair of the House Resolutions Calendars Committee, was first elected to the chamber in 2002. He represents House District 31, which is anchored in the Rio Grande Valley and extends north to outside San Antonio.

The district saw a huge swing in the 2020 presidential election. Donald Trump won it by 13 percentage points, four years after Hillary Clinton carried it by the same margin.

But HD-31 is set to become far more friendly to the GOP next year thanks to redistricting. Under the new map that Abbott signed into law last month, HD-31 transforms into a district that Trump would have won by 25 points.

Guillen did not vote on the new map. He had an excused absence when it came to the House floor, according to the chamber’s journal.

One Republican, Mike Monreal, has already announced a campaign for HD-31 in 2022. Monreal is a Navy veteran and construction firm executive.