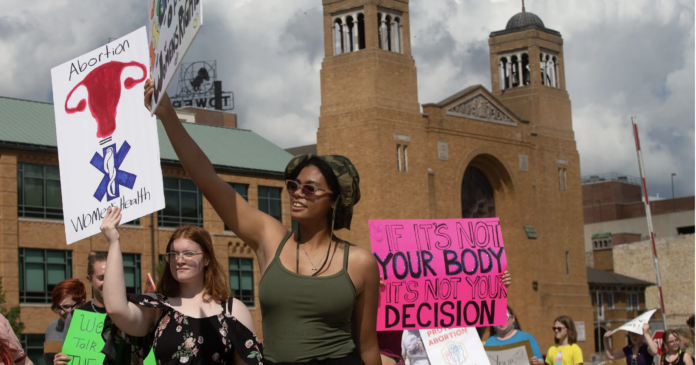 Heading into a difficult election cycle, Democrats and abortion-rights supporters in Texas were energized by voters in Republican-dominated Kansas who on Tuesday resoundingly voted to keep the right to an abortion in their state constitution.

“This decision that came down from Kansas is a decision that has far-reaching consequences not just for the way people are approaching this fight on protecting a woman’s right to determine her bodily autonomy but also it gives people a lot more motivation to work toward electing Democrats in the state that can make that difference,” said Gilberto Hinojosa, chair of the Texas Democratic Party.

In a close election, Hinojosa said, an issue like the right to an abortion becomes critical for winning over moderates and independent voters — two groups that can help Democrats narrow the margins against the state’s long-dominant GOP.

This November in Texas, there’s no vote to protect abortion rights on the ballot, but there are high stakes races for legislative, congressional and state seats — including governor — that are expected to generally favor Republicans.

Republican leaders and abortion opponents say the other side is grasping at straws.

“Democrats don’t have much to hang their hat on so I don’t doubt they’re trying to find something to energize their voters, but this isn’t it,” said Matt Rinaldi, chair of the Republican Party of Texas. “On the abortion issue, poll after poll shows that Americans are closer to the Republican view than the Democratic view.”

Rinaldi chalked up the loss in Kansas to confusion over the wording of the amendment on the ballot.

“I’m an attorney and I read it three times and I still can’t figure out if I would have figured out how I would have cast my vote if I wanted to vote pro-life,” he said. “I have no doubt that played into the ballot results.”

Drew Landry, a political science professor at South Plains College, said the Kansas election result was a much-needed shot in the arm for Democrats across the country but it would be difficult for the Texas Democratic Party to ride that momentum all the way until November.

“Between now and early voting, anything can happen,” Landry said. “If you’re pro-choice, last night’s result was great for you, but that’s really all that means. OK, great [but] you gotta keep up that momentum or else it’s just gonna burn out.”

Landry said the task for Texas Democrats is more difficult because abortion isn’t explicitly on the ballot as it was in Kansas.

There, the Republican-led Legislature last year spearheaded the ballot initiative effort to declare that there was no right in the state constitution to abortion. Republicans launched that effort because in 2019, the state Supreme Court had ruled that the right to abortion was protected under the state’s bill of rights.

Abortion opponents expected that voters in conservative Kansas would side with them and, after approving the constitutional amendment, allow state legislators to take abortion restrictions into their own hands after the U.S. Supreme Court struck down constitutional protections for abortion in June.

Voters instead chose to keep the right to an abortion.

“It’s a cautionary tale for Texas,” said Joe Pojman, executive director of Texas Alliance for Life, which opposes abortion. “[But] I don’t think it will have much effect in our state.”

Constitutional amendments in Texas must be passed by two-thirds of each chamber. If Republicans wanted to pursue a similar effort, it would require 100 votes in the House and 21 in the Senate. Under the current makeup of the chambers, all the Republicans in both chambers would have to vote for the amendment and would still need around 20 Democrats in the House and three in the Senate to approve the amendment.

“The way the Legislature looks right now, Republicans don’t have two-thirds of either chamber so they wouldn’t be able to do that on a party-line vote and I don’t think there’s enough Democrats who would peel off on this kind of proposition,” Landry said. “So even proposing it would not be without hurdles.”

Even if lawmakers somehow found a way to get the two-thirds threshold, the amendment would then go to voters for approval — a risky proposition, as Kansas lawmakers learned.

“What if they proposed it and what if it failed? Well, then egg’s on their face,” Landry said. “For an issue that is near and dear to the hearts of the Republican Party and conservative movement, if that was to be proposed and rejected that would be a big kick in the gut and I don’t think they want to risk that.”

Republicans in Texas are more likely to continue to work to restrict abortion rights through legislation, Landry said. Abortion is already nearly completely banned in the state after the U.S. Supreme Court’s decision to overturn Roe v. Wade — the constitutional protection for abortion in place since 1973 — earlier this summer.

Still, Democrats and abortion-rights supporters say they can use the election results in Kansas to motivate their voters to turn out in November.

Hinojosa said his party will make the pitch to voters that the way to reverse course on abortion restrictions is by voting for Democratic candidates who can sweep out the Republican incumbents who have made those laws.

Although there isn’t an abortion measure on the ballot, voters are energized to defend abortion rights, said Dyana Limon-Mercado, executive director of Planned Parenthood Votes Texas.

“Even though we don’t have a statewide ballot initiative, abortion is definitely on the table and Greg Abbott has made it clear which side he’s on and Beto O’Rourke has made it clear that he’s for Texans and he trusts Texans,” she said.

But abortion opponents are just as confident.

“We’re waiting till Nov. 8 to see how the votes turn out [but] I’m not seeing any kind of a movement in Texas,” Pojman said. “Our elections are looking good for pro-life Republicans including Gov. Greg Abbott, [Attorney General] Ken Paxton, members of the Legislature and certainly members of Congress. I don’t see that [the Kansas election] result is going to impact our elections here in Texas.”

Disclosure: Planned Parenthood and Texas Forward have been financial supporters of The Texas Tribune, a nonprofit, nonpartisan news organization that is funded in part by donations from members, foundations and corporate sponsors. Financial supporters play no role in the Tribune’s journalism. Find a complete list of them here.