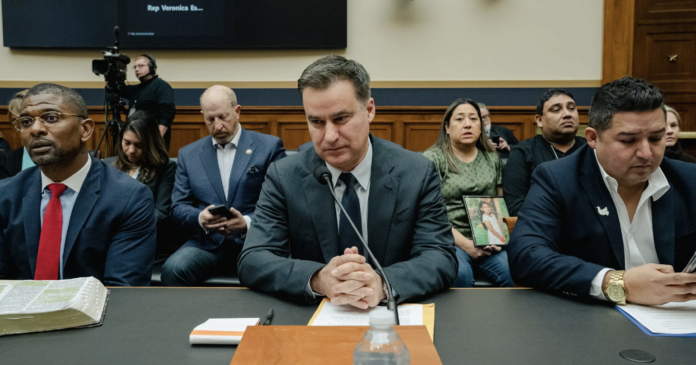 WASHINGTON — Texas state Sen. Roland Gutierrez, who represents Uvalde, lambasted the emergency response to the Robb Elementary School shooting as “the worst response to a mass shooting in our nation’s history” during a congressional hearing Thursday.

“It was system failure, it was cowardice,” Gutierrez said. He joined family members and supporters of the victims in calling for stronger federal action to prevent gun violence.

Gutierrez, a Democrat, made the remarks during a hearing of the U.S. House Judiciary Subcommittee on Crime, Terrorism and Homeland Security that was focused on bipartisan legislative solutions to gun violence. But bipartisanship was hardly present as Democrats continued to point out what they called common-sense gun policy and Republicans accused them of trying to take away constitutional gun rights.

U.S. Rep. Sheila Jackson Lee, D-Houston, chaired the hearing, which also included U.S. Reps. Veronica Escobar, D-El Paso, and Louie Gohmert, R-Tyler. U.S. Rep. Joaquin Castro, D-San Antonio, is not on the subcommittee but joined the audience to listen in. Castro, Jackson Lee and Gutierrez had a hearing in Uvalde in September to hear from families.

A Texas House report found in July that “systemic failures” at almost all levels of power allowed the 18-year-old gunman to massacre 21 people at Robb Elementary. Gutierrez told members of Congress that “there is no transparency and no accountability to date.”

Most of the hearing focused on the sources of gun violence rather than the emergency response. Jackson Lee mentioned proposals Democrats have raised to curb gun violence in the past, including raising purchasing ages; creating red flag laws, which allow judges to temporarily seize firearms from people who are deemed dangerous; and banning AR-15-style weapons. She called out Republicans for not supporting them.

“I’m angry. Legislators are not supposed to be enraged. We are simply supposed to stand with stoic faces and let witnesses put their souls on the table,” Jackson Lee said. “None of you should have to tell your stories.”

But Gutierrez criticized the bipartisan gun law as lacking basic provisions that would have stopped the massacre. He was angered that the Senate stripped a provision raising the minimum age to buy assault weapons to 21.

“The fact is in Texas you got to be 21 to buy a handgun, 21 to buy a beer, 21 to buy a pack of cigarettes, but you can be 18 and buy an AR-15, and that’s what happened here because this governor allowed it,” Gutierrez told reporters during a recess in the hearing. “It’s time for change, not just in Texas but throughout this country.”

The hearing also included emotional testimony from family and community members from Uvalde.

“It hurts. I lost my better half,” said Faith Mata, a witness whose younger sister Tess died during the shooting. Mata fought back tears earlier as she described the loss of her younger sister and how “we will never know how scared she was in that last classroom.”

Roy Guerrero, a Uvalde physician who knew and treated many of the children killed in the shooting, rebuffed any idea that an act of heroism or intervention could have stopped their deaths when an AR-15-style gun was involved.

“These kids weren’t helpless victims that day. They were spunky, intelligent, street-smart kids” who knew how to act in an emergency situation, Guerrero said. “But with a weapon like that, [they] had no chance.”

In one of the most emotive moments of the hearing, Guerrero played a recording of children’s screams as they struggled to flee Robb Elementary School.

Republicans and their witnesses focused instead on social issues as the cause of gun violence, particularly absent fathers. Jack Brewer, chair of the Center for Opportunity Now at the Donald Trump-aligned America First Policy Institute, said “bringing the paddle and prayer” back to public schools would address the “root causes” of gun violence.

Gohmert said abuse of Second Amendment rights were the consequence of decaying moral education in schools, insisting that “our morality as biblical Judeo-Christian morality is going out the window.”

Democrats rejected the argument as absurd.

“Really?” said U.S. Rep. Madeleine Dean, D-Pennsylvania. “We had testimony of a headless child. We’re going to talk about how paddles and prayers are going to solve this problem? Where is our humanity?”

The hearing came the day after the 10th anniversary of the school shooting in Newtown, Connecticut, where 20 children and six other victims were killed by a gunman. Nicole Melchionno, a high school senior who survived the Newtown shooting as a second grader, told the committee she was there to “beg our lawmakers who voted into office to please do everything in your power to protect us.”

“We ran out of time over a decade ago. We need to act now,” Melchionno said.