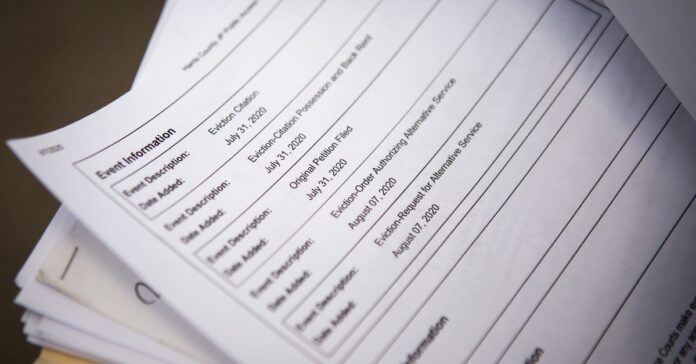 With the death of the nationwide moratorium on evictions, hundreds of thousands of Texas renters lost a key legal protection they had against losing their homes.

The U.S. Supreme Court struck down the ban on evictions last week — clearing the way for Texas landlords to pursue evictions unabated.

But even when the federal moratorium was in place, the ban on evictions wasn’t uniform. The moratorium wasn’t enforced in every part of Texas. And not all renters knew about the order — or how to take advantage of it.

Out of more than 25,000 eviction cases in Harris County from September to July, the moratorium helped tenants in fewer than 3,300, according to an analysis by January Advisors, a Houston-based data firm. Of those, about 2,400 still could face eviction.

Complicating matters is the renewed surge of coronavirus cases fueled by the highly contagious delta variant.

The Centers for Disease Control and Prevention’s latest moratorium was intended to help struggling renters in parts of the country dealing with the rampant spread of the delta variant. Now, as the moratorium ends and the virus rapidly spreads, those most at risk for eviction face higher risk of catching the virus, advocates said.

“Their vulnerability to COVID-19 is even greater now in some ways because this variant is so contagious,” said Karen Miller, executive director of the nonprofit Texas Legal Services Center.

Where you live matters for receiving help

The protections and financial assistance available to struggling renters depend on which city or county they live in.

“It’s complicated,” said Ally Harris, who works for the nonprofit Texas Housers. “There are many puzzle pieces in play.”

For example, landlords in Austin are still barred from evicting tenants in most circumstances. In Dallas, city officials have put in place measures to try to slow down landlords pursuing evictions.

Texas’ major cities and counties have their own programs for locals to get help with rent and utilities. But most local governments in Texas don’t, leaving residents in rural counties to rely on the state’s rent relief program — which has been criticized for being slow to provide assistance.

Some $1 billion in federal dollars sent to the state as well as cities and counties to help renters avoid financial ruin is still on the table.

Of the nearly $2 billion in federal rental assistance dollars sent to Texas since December, more than half still remains unused. Texas has nearly $692 million available through its statewide rent relief program. Cities and counties that operate local rental assistance programs have $368 million.

And more is on the way. Texas is slated to get more than $1 billion in additional federal rent relief money when the current amount runs out.

Meanwhile, more than 486,000 Texan renters — the majority of whom are Black or Hispanic — said they are behind on rent payments, according to a recent Census Bureau survey. Of those, more than 330,000 feared they were at least somewhat in danger of being evicted.

Landlords don’t have to participate

Even if tenants qualify for rental relief, landlords don’t have to accept the money and can proceed with evictions.

“Sometimes we see landlords who are angry that they have not been paid for so long and feel that even rental assistance that covers reasonable late fees, all of the rent, some future rent doesn’t make them whole in the way that we would like them to think it does,” said Marissa Latta, a housing attorney with Texas RioGrande Legal Aid. “They’d rather just evict people and put in new tenants anyway.”

Most landlords and tenants have good relations and can work together if renters are struggling, said David Mintz, vice president of government affairs for the Texas Apartment Association.

But many landlords have gone months without rental payments — putting them under considerable financial strain, Mintz said. Many renters make too much money to qualify for rental assistance — leaving landlords with no choice but to proceed with eviction.

“Evictions are always the last resort,” Mintz said. “Whether we’re talking about the pandemic or not being in the pandemic, it is not something that they do without good reason and after pursuing other options. They try to do everything they can.”

Texas officials have enacted some means to try to slow evictions. Landlords and tenants can delay an eviction for up to two months by agreeing to participate in the state’s eviction diversion program, which offers 15 months’ worth of rental and utility assistance.

If a tenant qualifies, they can stay in their home while their eviction case is dismissed and struck from the public record.

So far, more than 12,000 households have been assisted through the program, according to data from the Texas Department of Housing and Community Affairs.

But to qualify, tenants must make 80% of their area’s median income or less and already have an active eviction case against them.

The program doesn’t entirely shield tenants from eviction. During the two-month delay period, a landlord can change their mind and restart eviction proceedings. Even if a landlord receives payment under the diversion program, they can pursue evictions against the same tenant for reasons other than nonpayment.

For now, the eviction diversion program lasts until Oct. 1.

Renters in many urban areas can get free legal help

In most eviction cases, tenants don’t have legal representation. Fewer than 4% of tenants facing eviction in Harris County had a lawyer representing them in court, according to January Advisors.

A group of nonprofits — including Texas RioGrande Legal Aid in South Texas and Lone Star Legal Aid in the Houston area — have sought to provide legal assistance to tenants fighting eviction cases.

In Houston and San Antonio, local governments pay for lawyers to represent tenants before justices of the peace.

There are efforts to expand that kind of legal aid statewide. Texas gave a $20 million grant to the Texas Access to Justice Foundation, a legal aid group — $12.5 million of which will go toward legal services for struggling tenants.

Out of that, the nonprofit Texas Legal Services Center expects to get $1 million to hire six attorneys to cover 17 rural counties.

“What we’re really trying to do is avoid homelessness altogether and make sure that someone’s not just out on the streets,” Miller said.

Disclosure: The Texas Apartment Association has been a financial supporter of The Texas Tribune, a nonprofit, nonpartisan news organization that is funded in part by donations from members, foundations and corporate sponsors. Financial supporters play no role in the Tribune’s journalism. Find a complete list of them here.