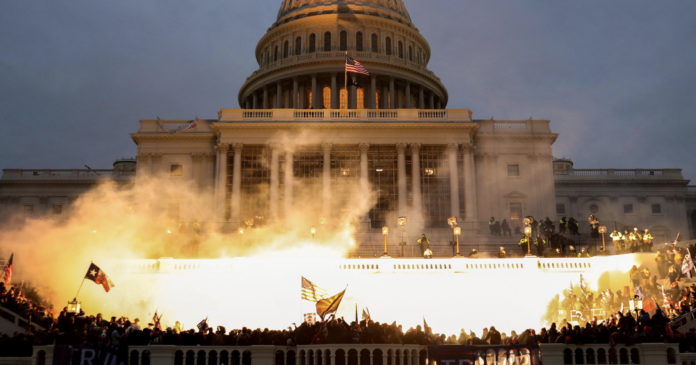 More than 3,000 Texans — including four police chiefs, two county sheriffs, two constables and two county commissioners — have been members of the Oath Keepers, a far-right extremist group that played a prominent role in the U.S. Capitol riot on Jan. 6, 2021, according to an analysis of leaked membership rolls.

The Anti-Defamation League Center on Extremism published a report Tuesday after reviewing more than 38,000 names on a massive cache of documents from the Oath Keepers that was leaked to transparency collective Distributed Denial of Secrets and released last year. The documents included chat logs, emails and membership rolls from 2020 and 2021. It’s unclear when the membership lists were last updated.

The ADL’s report analyzed where the members lived and worked and found that Texas had more people listed in the Oath Keepers’ membership rolls than any other state. Texas is the country’s second-most populous state.

Texas also had the most people who were either elected officials, law enforcement officers, military members or first responders, the report found. Of the Texas signups, 33 were law enforcement officers, 10 were members of the military, eight were elected officials and seven were first responders. No federal officials were listed in the membership documents.

Some of the law enforcement officers and elected officials named by the ADL told The Texas Tribune they were not familiar with the group’s mission at the time they signed up. Others said the the direction of the Oath Keepers had shifted away from its original mission.

Shirley said he publicly resigned from the group in November 2020. Shirley was a member for more than a decade and served as the Oath Keepers’ Texas chapter president, national peace officer liaison and on the group’s board of directors. In February 2020, Shirley submitted a letter to Hood Country Today defending the organization’s mission.

Glenn, Bourquin, Lyde, Hooper, Wright and Giusti said that while they did sign up for the Oath Keepers, they have never been active members of the group. Perry said he was never a member.

None of the other Texans named by the ADL have responded to calls or emails from The Texas Tribune seeking comment.

The Oath Keepers asks its members to “defend the Constitution against all enemies, foreign and domestic.” The group, fueled by baseless conspiracy theories, claims that the government poses a threat to civil liberties. In reality, former Oath Keepers spokesperson Jason Van Tatenhove — who has since left the group and speaks publicly about its dangers — has said the group is actually “selling the revolution.”

On Jan. 6, 2021, the Oath Keepers descended on the steps of the U.S. Capitol to lead the siege challenging the results of the 2020 presidential election. At least 26 members of the group have since been arrested in connection with the attack.

The Oath Keepers’ membership list does not reflect the extent of the members’ involvement in the group. The ADL report said that some may have been introduced to a watered-down version of the group’s mission and many have since left the group. Hundreds tried to cancel their memberships after the Jan. 6 riot, BuzzFeed News reported. But the ADL also points out that the Oath Keepers have always been vocal about its extremist far-right views since its inception in 2009.

“Even for those who claimed to have left the organization when it began to employ more aggressive tactics in 2014, it is important to remember that the Oath Keepers have espoused extremism since their founding, and this fact was not enough to deter these individuals from signing up,” the report notes.

The fringe group has focused on recruiting current and former military, police and first responders. The ADL report says that in written comments provided to the Oath Keepers, some people who joined the group offered to use their positions of power to aid the Oath Keepers in a variety of ways. One member of the Idalou Police Department, outside of Lubbock, said he would use his position to introduce other law enforcement officers to the Oath Keepers’ ideology through presentations, according to the report. The ADL report does not identify the person or their position in the department.

Williams, the Idalou police chief, told PBS Newshour that it had been over a decade since he had been a member or had interaction with the Oath Keepers. Williams denounced the riot of Jan. 6 as “terrible in every way.”

The city of Idalou declined to comment on whether the police department has policies regarding staff’s membership in extremist groups.

Bourquin, the Amarillo ISD police chief, said he joined the Oath Keepers a year ago “at the urging of a fellow first responder.” After receiving emails from the group on his personal email account, Bourquin said he “quickly came to realize that the group was not what I expected it to be” and unsubscribed. He said he’s saddened to be associated with the group and its extremist views based on a form he filled out years ago.

Glenn, who was sworn in as a Quitman alderman in November 2020 and is seeking reelection this year, said in an emailed statement that he was with members of the Oath Keepers during a hurricane in Houston helping deliver supplies to residents hit by the floods. He said he has “zero idea of any of (the Oath Keepers’) involvements” since then.

“Shortly after that, I saw exactly what the founder was all about. I cut ties with them immediately,” Glenn wrote in a statement to the Tribune.

Wright, the constable in Collin County, signed up for the organization before he took office for the first time. The ADL noted that he shared his government position during sign up: “Constable elect for Collin County Pct. 4 Constable’s office. Currently a Collin County deputy sheriff.”

When the Oath Keepers’ documents were first leaked in October 2021, Wright told USA Today that he didn’t know much about the group when he joined.

“To be honest, I felt pressured to join it in this county for political support,” Wright said at the time. “The Oath Keepers, if you didn’t support them, you were going to get bad reviews.”

Wright said he did not support the group and had not engaged since.

Lyde, the Clay County sheriff, said he may have sent $5 to the Oath Keepers over a decade ago and received merchandise from them, including a sticker and a hat. He wrote from the official sheriff’s office Facebook page that he has never been an active member of the group.

“Since then, many of the members have slid into something I don’t recognize or consider patriotic and although I don’t blame all of them, it’s just not for me,” Lyde wrote to a resident. “I have never attended a rally or meeting (and don’t know if they have them) and certainly don’t pay dues.”

Lyde was indicted by a Clay County grand jury that same month for two charges of official oppression, according to court documents filed last year. He is also facing questions about why he left the Department of Public Safety over a decade ago, in part, for submitting false information on performance reviews.

Hooper, the sheriff of Nueces County, was reported to be a former member of the Oath Keepers last November. He told the Corpus Christi Caller Times that he had not been a member since 2009 and had distanced himself from the group.

Giusti, a Galveston County commissioner, said that he joined the group over a decade ago when we was a law enforcement officer but didn’t renew his membership after a year because of its rhetoric and direction.

“The idea of living up to my oath of office originally appealed to me however it became evident that there was an undercurrent in the group that was going in the wrong direction,” Giusti wrote in an emailed statement.

Perry, the Ellis County commissioner, told the Tribune he has never been a member of the Oath Keepers and was surprised to learn he appeared in the group’s leaked membership rolls. He denounced the Jan. 6 riot at the Capitol but also questioned the timing of the release of the ADL’s report ahead of the November midterm elections.

Members of the Oath Keepers listed in the documents also included Texans in other occupations. An attorney with a law firm based in East Texas told the group that he “may be able to assist in legal matters,” the report said.

The ADL did not identify the attorney and declined to share the names of individual law enforcement officers or military personnel identified through their analysis, citing concerns that the report could be used to dox rank-and-file personnel.

Among those arrested in connection with the attack on the Capitol Jan. 6 is Oath Keepers founder and leader Stewart Rhodes, a Texan who was arrested in January and is accused of conspiring to oppose the transfer of presidential power by force.

More than 70 Texans have been charged for their roles in the Jan. 6 insurrection, according to a USA Today database. They include Guy Reffitt who was sentenced to 7 1/4 years in prison last month after prosecutors said he “lit the match” for the riot.