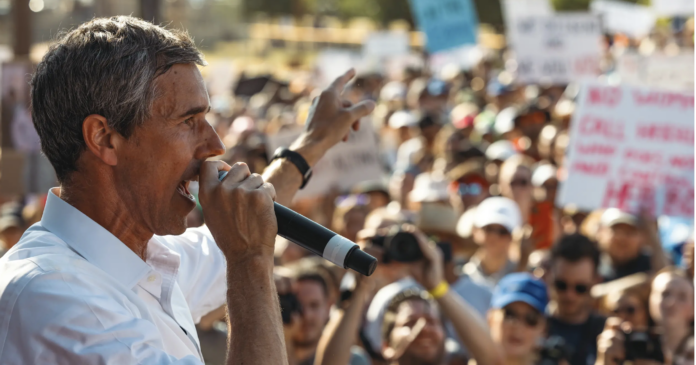 Democratic gubernatorial candidate Beto O’Rourke raised a staggering $27.6 million from late February through June, according to his campaign. At least for now, that’s the most amount of money a Texan seeking state office has ever raised in a campaign finance reporting period.

O’Rourke and Republican incumbent Gov. Greg Abbott are set to formally disclose their latest campaign finances on a report due Friday to the Texas Ethics Commission. It will cover Feb. 20 through June 30.

Abbott has not yet publicly disclosed how much money he raised in that period. But the $27.6 million that O’Rourke raised tops every amount Abbott — or anyone else — has previously raised in a single reporting period. And it gives O’Rourke a major boost as he challenges Abbott, who has had a massive financial advantage so far.

O’Rourke’s haul came from over 511,000 contributions, 98.9% of which came in online, according O’Rourke’s campaign. The average donation was $54.

As of the last report, though, Abbott had a huge cash-on-hand advantage over O’Rourke: $49.8 million compared to $6.8 million.

O’Rourke’s campaign did not release his latest cash-on-hand figure.

The most recent fundraising period saw at least two major events that energized Democrats, including the Uvalde school shooting in May and then the U.S. Supreme Court ruling that overturned Roe v. Wade in June.

“We’re receiving support from people in every part of Texas who want to work together to ensure our state moves beyond Greg Abbott’s extremism and finally leads in great jobs, world class schools, the ability to see a doctor, keeping our kids safe and protecting a woman’s freedom to make her own decisions about her own body, health care and future,” O’Rourke said in a statement.

O’Rourke’s $27.6 million haul could easily be historic. For comparison, Abbott is the strongest fundraiser the state has seen in modern times, and his best reporting periods have not cracked $20 million in contributions.

Abbott’s campaign sought to set high expectations for O’Rourke’s fundraising during a call with reporters Wednesday. Abbott’s chief strategist, Dave Carney, predicted O’Rourke would report raising $30 million. Carney declined to say if Abbott would top that number, but said $30 million “would be a historic, kick-ass number for Beto.”

Abbott’s campaign has long made clear it plans to spare no expense on the race, predicting that it will spend over $100 million total. And it recent weeks, it has started flexing its financial prowess, announcing plans to spend an initial sum on advertising that is nearly $20 million.