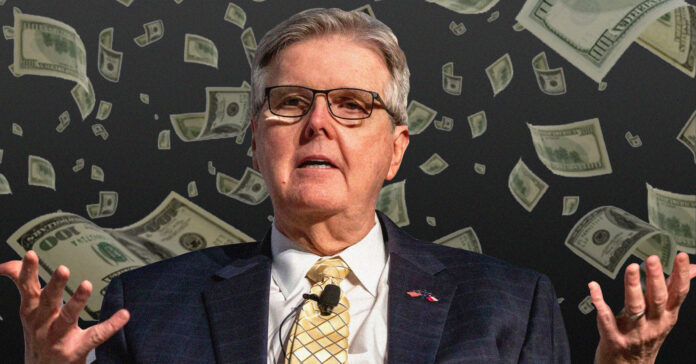 Since losing the elections in 2020, Trump has repeatedly sought to sow doubt over the integrity of the general election and even falsely claimed victory over Joe Biden despite there being no evidence of widespread voter fraud in any US state.

Many Republicans across the country have echoed Trump’s voting conspiracy theories, blaming Democrats for casting doubt on the election results by not passing more restrictive voting laws.

A week after the 2020 elections, Texas Lt. Gov. Dan Patrick announced that he was offering up to $1 million -paid from his campaign account- “to incentivize, encourage and reward people to come forward and report voter fraud.” The reward offer went viral, thrusting Patrick and Texas into the national spotlight as one of the top supporters of Trump.

Patrick said at the time, “I support President Trump’s efforts to identify voter fraud in the presidential election and his commitment to making sure that every legal vote is counted and every illegal vote is disqualified. President Trump’s pursuit of voter fraud is not only essential to determine the outcome of this election, it is essential to maintain our democracy and restore faith in future elections.”

But instead of going to an informant who smoked out fraud by Democrats, the money went to a progressive poll worker in Pennsylvania whose tip led to a single conviction of illegal voting by a registered Republican.

Eric Frank, received $25,000 for his part in reporting Ralph Holloway Thurman, a Republican who after voting once, attempted to vote a second time as his son, as first reported by the Dallas Morning News.

Thurman pleaded guilty and was sentenced in September to three years probation and barred from voting for four years, according to The Philadelphia Inquirer.

“It was just ironic — It’s my belief that they were trying to get cases of Democrats doing voter fraud. And in fact, it was the complete opposite of what their intentions were,” Frank said. “This kind of blew up in their face.”

Mark Jones, a political scientist at Rice University’s Baker Institute for Public Policy, said this case underlines what we already know about voter fraud: It occurs but in small numbers that don’t have an effect on election outcomes. Patrick probably hoped to uncover widespread fraud among Democrats, Jones added, and one-off convictions of Trump supporters don’t fit that narrative.

“As long as he doesn’t have to make too many more payouts, he’ll probably say, ‘the positive public exposure I received is worth the $25,000 I paid,’” Jones said. But Patrick’s bounty could be a cautionary tale for other politicians: “Be careful what you wish for.”