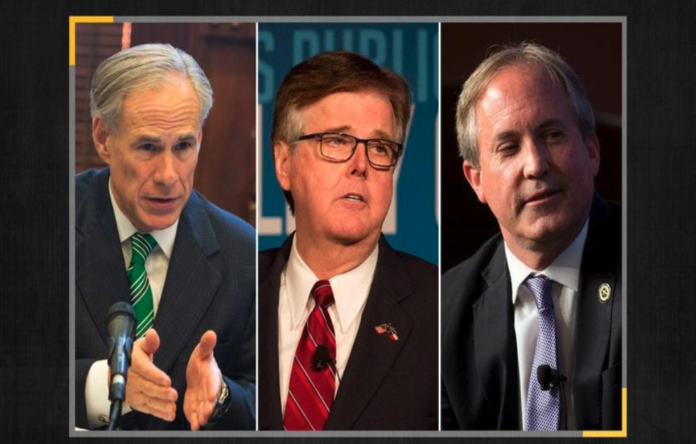 The bang of the gavel on October 19th signaled an end to this horrifying third special session of the 87th Texas Legislature; a Republican “slash and burn” event for the most part. For most Democrats (and some Republicans), sine die is the sweetest phrase in the Texas vernacular; a collective sigh of relief and safety.

But as always with Texas politics, that feeling of safety is brief and fleeting.

Only the day after sine die, Dan Patrick, the El Diablo of our statehouse, was already tweeting, pushing for a fourth session.

Patrick is pushing felony penalties for illegal voting, and a revenue-sucking state election audit. Most of this is at the urging of Trump and Patrick’s nightly hotline. The GOP already lost in the failure to restrict businesses to require vaccines. Business pushed back against that kind of government intrusion.

So Dan Patrick wants a fourth special session of the Legislature, eh? Does he realize it costs between $800,000 and $1.3 million for EACH special session? Have Texas taxpayers figured this out yet? And for what? 1. Election audits ($250 million) and 2. Increased penalties for illegal voting (to keep people away from the polls out of fear)

Abbott said no, but you can bet Patrick (and Trump) will keep grinding, just like 5 year olds at the grocery store checkout.

Meanwhile, Trump is also toying with other politicians; criticizing Phelan as a Texas “Mitch McConnell”, but praising Hughes by telephone. Trump is like a cat at the mouse hole and all of them are rolling over and pissing on themselves like a submissive puppy. They all view him as a rung-assist on the ladder to a higher office.

The biggest partisan bombshell since the redistricting maps and the end of the session dropped on Thursday. Abbott appointed John Scott as the Texas Secretary of State. In Texas, the SOS serves as Chief Election Officer for Texas, assisting county election officials and ensuring the uniform application and interpretation of election laws throughout Texas. Unlike in other states, this officer is appointed, not elected. Here is the scary part. John Scott represented President Donald Trump in his legal challenge of the 2020 election results in Pennsylvania.

So now, in addition to Abbott, Patrick and Paxton, add one more to Texas’ list of Trump influencers. How convenient that Texas now has someone who worked to perpetuate Trump’s “Big Lie” overseeing our elections. And might I remind Texans that Senator Bryan Hughes, Mr. “Nice Guy” from Minneola, who wrote the restrictive election overhaul bill was also an attorney on the Pennsylvania case. NONE of this was in Abbott’s press release.

And then, there are those redistricting maps. I refuse to go there right now.

Political doomsday writers and media Debbie Downers keep repeating that Texas is the Democrat’s lost cause. Regardless of what Ross Ramsey wrote in the Texas Tribune on Monday, I still believe there’s a chance to “purplize” Texas. Why? Because the Texas GOP is in a full-body embrace with authoritarianism, mostly led by Dan Patrick, who’s in a soul-deep relationship with Trump. Dems may have a purple chance, even with a Republican Governor, but the NUMBER ONE task is to get rid of Patrick and Paxton and that means electing Mike Collier and Joe Jaworski as their replacements.  If we have Dems in at least those two races we can at least hope for a better tomorrow. Texans were unwilling to die for the Dow and I think they are unwilling to genuflect before the Texas Trinity as well.

The reality remains that Texas Democratic voters are essentially screwed right now. We could get a full voter turnout and still lose if John Scott chooses to “disallow” our votes because it would result in a GOP loss. Texas is effectively a third world country in voting rights. The power structure is rigged to only allow the votes that help them to win. They will be the ones to declare “yea” or “nay”. It’s hard to know where to focus, when we’re constantly swatting at flies.

The truth is this: We are under the tyranny of the minority in Texas. I have no magic solutions, except my usual motto: If you’re going through hell, keep going. It has to end sometime IF we persevere by voting, elect those who’ll pass our agenda, & remain informed and active. Freedom to Vote Act would have helped immensely, but that ended with the obstruction of the GOP and a couple of stubborn bait-and-switch Democrats, but it’s a setback, not a death knell.