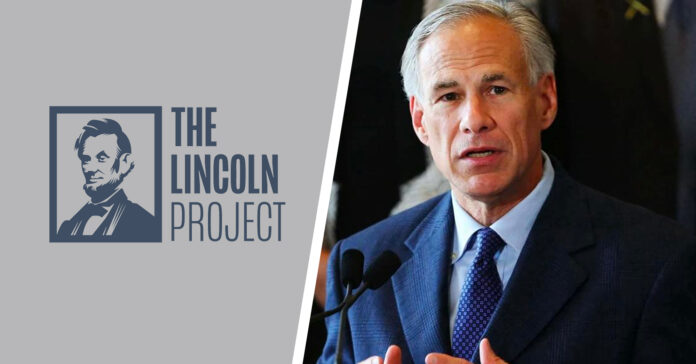 The Lincoln Project, the anti-Trump organization, said on Friday that they would be filing an ethics complaint against Texas Gov. Greg Abbott, “for misuse of official time and resources in furtherance of his re-election campaign.”

According to The Hill,  the University of Texas allowed conservative news outlet Breitbart News to conduct an interview with Abbot this month at their football stadium. When one month earlier an ad critical of Abbott’s handling of the COVID-19 pandemic, could not air on ESPN during a university football game, because of “an undisclosed policy against running political advertisements.”

The organization also said in their announcement that they filed FOIA requests with both parties whether there was any communication over the PAC’s ad.
“As his approval continues to sink, Greg Abbott has become more and more extreme in his use of state power to achieve his political goals,” Reed Galen, co-founder of the Lincoln Project, said in a statement. “We aren’t surprised he would deny free speech to his opponents. We’re also not surprised that Abbott, a former Supreme Court justice and Texas Attorney General, would so flagrantly violate state law by using the Longhorns’ hallowed ground for his venal and cynical political purposes.”