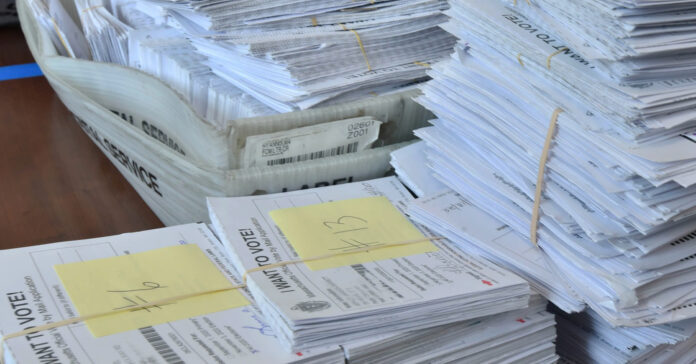 In the long Republican-led war against mail-in voting in Texas, it looks like the best tactic has already been deployed: confusion. The entire system is a mess.

Madlin Mekelburg of the Austin American-Statesman spoke to Travis County Clerk Dana DeBeauvoir about the new mail-in forms, and voters are already being tripped up. The old form that was used did not contain a box for a Texas Voter ID number (VUID). Note, this is a different from a social security or Texas driver license number and is instead a unique identifier used by the state voting system. If a voter sends in the old form, their application for a mail-in ballot will be rejected. The new form requires that voters include the VUID on both the application and the ballot itself. Mess up either, and the form will be rejected.

According to DeBeauvoir, the rejection rate in Travis County is already a shockingly high 27 percent. Out of 1,914 applications for a mail-in ballot, 509 were rejected. Half of those were because of errors involving the VUID. Either applicants did not put one down, or used their social security or driver license number, or used two different numbers so they did not match.

DeBeauvoir says she has tried to speak with Texas Secretary of State John B. Scott, but has not been able to reach him.

The problem is being exacerbated by several other factors. One, the Secretary of State office portal for correcting improperly rejected ballots is apparently extremely confusing. The Secretary has announced two webinar training sessions this week, though the clock is definitely ticking when it comes to the upcoming primary. With more than one in four ballots being turned away for errors now, a lot of people may not be able to get their status appealed in time.

Supply chain issues are also affecting the process. Unlike 41 other states, Texas does not have an online application process for mail-in voting (or voting registration at all for that matter). Applications have to be sent in by mail, and production of those applications is being slowed down by a lack of paper. The League of Women Voters are usually able to get thousands of forms for registration drives. Now, they are being rationed.

The new draconian law limiting voter rights and access is playing its part. Under the law, government officials are no longer allowed to communicate with voters about mail-in ballots. That means her office and others like it are prohibited from walking voters through the process under severe penalty.

The Secretary of State office has been scrambling to do damage control, but it’s honestly adding more confusion rather than less. In addition to the webinars, they have said that old mail-in ballot forms should now be accepted, simply not distributed by the county offices.

The goal of the new law, which claims without any proof that the 2020 Presidential election was rife with voter fraud, has been to cripple mail-in voting in the state as much as possible. Attorney General Ken Paxton has even stated that if mail-in voting had been expanded, Texas would have flipped to Biden. It’s hard to see the chaos in the mail-in voting system as anything other than the intended result of Republicans worried that making the system more accessible would threaten their hold on power.