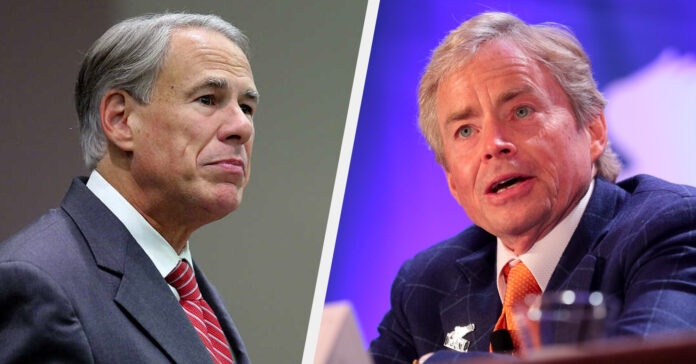 Real estate developer Don Huffines told a Dallas-Fort Worth conservative radio show two weeks ago he plans to spend $20 million in his quest to beat incumbent Greg Abbott to become the Republican nominee for Governor. How plausible is that claim?

His latest campaign finance disclosure shows he only raised $2 million in the latter half of 2021, which is half of the $4.1 million he raised in the first six months last year and less than half of the $5 million loan he gave his campaign in May.

Although Huffines did not loan his campaign more money towards the end of 2021, his twin brother and wife were the second and third largest donors in his latest campaign finance disclosure, contributing $375,000. His top donor was fellow Dallas real estate developer Scott Hall who wrote a $600,000 check. Huffines will need a lot more than that in light of the slower pace of his fundraising to ramp up spending to meet the $20 million goal.

If history is any indication though, Huffines will continue fueling his own campaigns just as he has when he was in the Texas Senate. He loaned his 2018 Texas Senate re-election campaign $500,000, which was ultimately unsuccessful. That represented 15 percent of the funds raised since he was elected to the Texas Senate in 2014 and 25 percent of what he raised in the 2018 election cycle alone.

For his gubernatorial campaign, Huffines’ loan to his campaign is 45 percent of all money Huffines raised thus far, $11.1 million. If the $2.2 million donated from his twin brother, Phillip Huffines, and $175,000 donation from his wife are factored too, only 33.7 percent of Huffines’ 2021 fundraising haul was donors other than the Huffines twins and the candidate’s wife.

Based on a review of the limited information in personal financial statements Huffines submitted while he was a State Senator and public records of the businesses he owns, the former Dallas state Senator is capable of bankrolling his campaign to the tune of millions. His net worth based on RA News’ analysis is likely at least $320 million.

Huffines has business assets, some of which he shares with his twin, worth nearly $300 million. Here are a couple of examples:

Huffines’ personal and family wealth may help him reach his $20 million spending goal but overcoming a well-known incumbent with a record-breaking fundraising haul is a tall task.