Home Wildlife A Giant Alligator Was Casually, And Peacefully, Walking By In A Texas...
Facebook
Twitter
Email 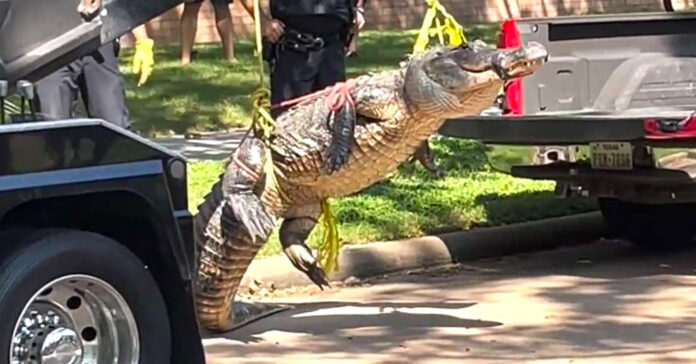 In the early morning of September 12, residents of Katy were surprised by a 12-foot, 400-pounds alligator just walking around the streets. Journalist Michael Schwab reported the incident.

Fort Bend County Precinct 1 Constable Chad Norvell said that, actually, alligator sightings were common in that neighborhood. Unlike crocodiles, alligators typically are shy and non-confrontational. That is why although the alligator was quite big, no one got hurt or was really in danger.

After the first calls, trappers arrived in the area and found the gator lying down after his walk and were able to capture him easily. Norvell even joked about it: «They wander from their areas, looking for a mate.» He also made several recommendations for incidents like this: “We always want to emphasize that alligators are native to the area so people shouldn’t be alarmed when they see them. And usually if you leave them alone, they’ll leave you alone.”