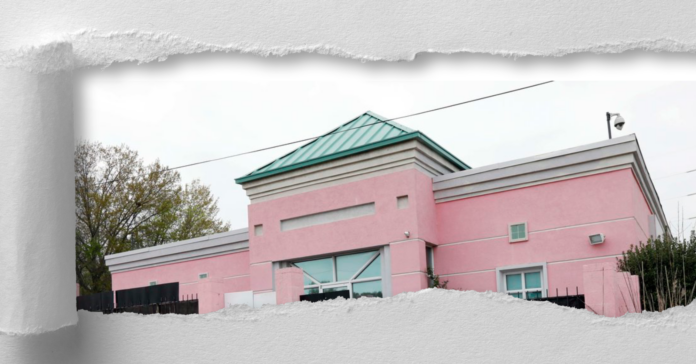 With Roe v. Wade overturned, abortion providers are flocking to New Mexico, one of the largest southwestern states that protects abortion access.

So-called “crisis pregnancy centers” are following their lead. One of these centers will now open across the street from the  Las Cruces Women’s Health Clinic, a reincarnation of the Mississippi clinic at the center of the Supreme Court case that reversed Roe.

Crisis pregnancy centers are largely non-medical sites that aim to dissuade people from getting abortions. Often, they’re located near abortion clinics and get patients in the door by offering free ultrasounds. While visiting, pregnant people are often given inaccurate information about abortion or its availability — such as false claims that abortions could cause breast cancer or mental health issues, or wrong suggestions that they are too late in pregnancy for an abortion.

Southwest Coalition for Life, a religiously affiliated anti-abortion organization, is working to open a crisis pregnancy center in Las Cruces, New Mexico, the organization’s CEO Mark Cavaliere announced at a rally Tuesday night. In a press release, Southwest Coalition for Life characterized the center as an entity “that will directly impact” the new abortion clinic’s “business potential.”

“This has become the epicenter of post-Roe America,” Cavaliere said.

Since September, when Texas began enforcing its six-week abortion ban, people seeking abortions have turned in droves to New Mexico-based providers. That has only accelerated since June 24, when Roe was overturned and abortion became illegal in many of New Mexico’s neighboring states. Wait times for an appointment in the state are now three to four weeks, and as more states enforce stricter bans, clinicians say they are not prepared to meet the climbing demand. That proximity to states with abortion bans, combined with the swell of out-of-state patients, has driven Jackson Women’s Health Organization, the now-closed clinic at the heart of the landmark case overturning Roe, to reopen in New Mexico. Planned Parenthood is also working to establish a presence in the city, as is the New Mexico Religious Coalition for Reproductive Choice, a major abortion fund in the state.

“Las Cruces is one of the flashpoints, it seems,” said Alisa Von Hagel, a professor of political science at the University of Wisconsin-Superior who studies crisis pregnancy centers. “With the introduction of new [abortion] facilities, it’s almost like clockwork that a crisis pregnancy center would set up across the street or next door in order to attempt to bring women in who are contemplating abortions, or women who do want an abortion but aren’t aware of the differences.”

Even before Roe v. Wade was overturned, crisis pregnancy centers outnumbered abortion providers 3 to 1. But now, with abortions banned or heavily restricted in 10 states, the presence of crisis pregnancy centers are taking on heightened significance. Southwest Coalition for Life’s building won’t be the first crisis pregnancy center in the city. But the establishments could prove confusing for people traveling to the border city for an abortion. Because crisis pregnancy centers often look like medical facilities, people in a new and unfamiliar environment could find themselves at the wrong building, missing an appointment that then needs to be rescheduled, or they could be given inaccurate medical information.

“If you are unfamiliar with where you are going and under a stressful condition — you may have children with you, there’s a million and five factors that make this particular endeavor to try to obtain an abortion that much more difficult — and then you have these facilities, its almost a perfect storm for trying to siphon off women who want to go to the abortion clinics,” Von Hagel said.

Crisis pregnancy centers have long been criticized by physicians and medical experts, who note that they are typically marketed to patients as medical clinics, even though, per the anti-abortion think tank the Charlotte Lozier Institute, the majority of people on their staff are not health professionals. Many of the centers do not have any medical providers on staff.

Because they are not registered as health clinics, crisis pregnancy centers are subject to far less regulation than abortion clinics. And though many offer free ultrasounds to patients, the readings are often inaccurate, resulting in patients mistakenly believing they have more time to schedule an abortion or that they are no longer eligible in their state.

Some of these centers offer people supplies such as diapers or religiously affiliated parenting classes. But their primary focus is to discourage visitors from seeking abortions, and they have come under scrutiny for giving pregnant people inaccurate information about the potential health consequences of ending a pregnancy.

Lawmakers who oppose abortion have argued that, within states banning or restricting access to abortion, these centers could offer support for people who experience an unplanned pregnancy. Republican leaders invited crisis pregnancy center leaders to testify before Congress in the weeks since Roe was overturned.

But the support these centers offer pregnant people — though it varies from center to center — usually does not last beyond the first year after pregnancy at most. And it does not typically extend to long-term parenting and economic support such as child care, job placement or help finding an apartment or finishing a college degree. Research has shown that people who seek an abortion and do not receive one are subject to lifelong economic penalties. Per the landmark Turnaway study, almost 3 in 4 people who were denied an abortion lived in poverty, compared with just over half of those who were able to get one.

Las Cruces has gained particular attention because of its proximity to Texas, and because of the arrival of Jackson Women’s Health Organization. But it is not the only city set to become a destination for people seeking abortions or for new clinics to open. The arrival of a crisis pregnancy center in this city foretells similar openings around the country, Von Hagel said.

“This is something that is the tip of the iceberg,” she said.