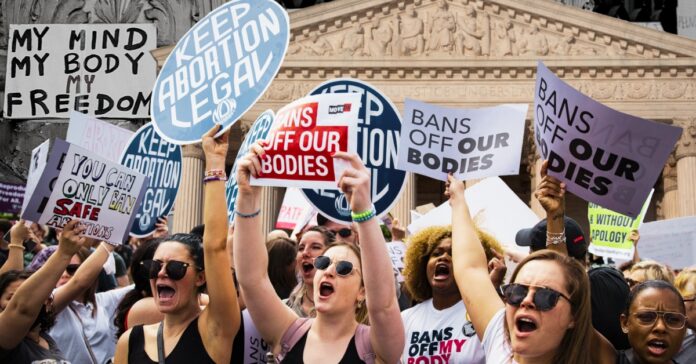 The controversial law allows for lawsuits against anyone who “aids or abets” an unlawful abortion, empowering private citizens to sue for a minimum of $10,000 in damages over any illegal abortion they uncover.

But Haas dismissed the suit filed by Chicagoan Felipe Gomez against San Antonio Dr. Alan Braid, who had admitted in a Washington Post op-ed that he violated the state’s then-six-week ban.

In his dismissal of a case against the abortion provider, he said that the state constitution requires proof of injury as grounds to file a suit, which was absent in the case.

The law created with the GOP passage of Senate Bill 8, became the most restrictive abortion law in the country when it went into effect in September of 2021. It states that anyone has the standing to sue over an abortion prior to six weeks of pregnancy, which is before most patients know they’re pregnant.

The tricky wording of the law allowed the state to get around federally protected abortion rights — by giving the power of enforcement to citizens — rather than the government. And it inspired other GOP-led states to incorporate the language into their laws across the nation, serving as a blueprint to allow enforcement by the public of other controversial laws targeting pornography, gay rights, and other social issues.

But some pundits believe that having citizens play an enforcement role instead of a government entity could backfire and be used by Democrats on issues like gun control.

Thursday’s ruling does not overturn the law or preclude similar suits, nor does it change the almost-total ban on abortion that went into effect in Texas when the U.S. Supreme Court struck down Roe v Wade earlier this year.

However, reproduction rights advocates were encouraged that they triumphed in the case, and hope it will provide a precedent for future cases.

“This is the first SB 8 case that has gone to a ruling, a final judgment,” said Marc Hearron, senior counsel for the Center for Reproductive Rights, which was part of Braid’s legal team.

“It doesn’t necessarily stop other people from filing SB 8 lawsuits, but what we expect is other courts, following this judge’s lead, would say if you weren’t injured, if you’re just a stranger trying to enforce SB 8, courts are going to reject your claims because you don’t have standing,” he added.

Gomez, who had no comment following the decision, is expected to appeal the decision, according to the center’s senior counsel, Marc Hearron.

“This is a significant win against S.B. 8′s bounty-hunting scheme because the court rejected the notion that Texas can allow a person with no connection to an abortion to sue,” said Nancy Northup, CEO of the Center for Reproductive Rights, in a written statement.

Braid admitted that he violated Texas’ strict new abortion law, on Sept. 6, less than a week after the new ban went into effect. He said in the op-ed that he intended to test the law by performing the abortion and writing about it in a national publication.

“I fully understood that there could be legal consequences, but I wanted to make sure that Texas didn’t get away with its bid to prevent this blatantly unconstitutional law from being tested,” he wrote.

The state has banned virtually all abortions except those that threaten a mother’s life, with punishment to medical providers of up to life in prison, but abortion patients are exempt from prosecution under the law.

Braid is the former medical director of Alamo Women’s Reproductive Services in San Antonio, and has been practicing since before Roe was made the law of the land. However, he was forced to close that clinic, as well as another in Oklahoma, due to the bans, which he said felt like “1972 all over again.”

“It is heartbreaking that Texans still can’t get essential health care in their home state and that providers are left afraid to do their jobs,” Braid said in a statement. “Though we were forced to close our Texas clinic, I will continue serving patients across the region with the care they deserve at new clinics in Illinois and New Mexico.”