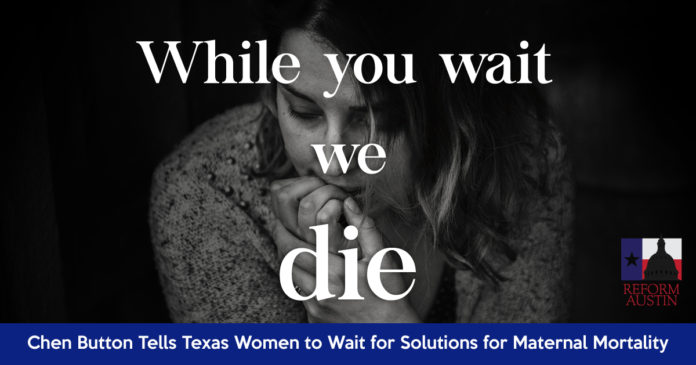 At a Texas Tribune panel last week, State Rep. Angie Chen Button (R-Richardson) told Texas women to “give a little time” for the Texas Legislature’s piecemeal solutions for women’s health to be implemented. In the meantime, Texas women are dying because there is a health coverage crisis. The latest data shows one in four Texas women of reproductive age are uninsured. Even worse, nearly half of the women of reproductive age in Dallas County lack health insurance.

Lack of access to care plays a big role in pregnancy related deaths in Texas, according to the state’s own data. The #1 surefire way to improve this rate and health outcomes for Texas women is to expand Medicaid and accept the billions of federal tax dollars Texans already pay.

“I’m a CPA. I know how to count money,” said Button, who voted against Medicaid expansion when it came to a vote on the floor of the House.

One of her issues, she claimed, with Medicaid expansion was how few doctors see Medicaid patients. She claimed only 17 percent do, which is false. In fact, according to the Texas Medical Association, 42 percent of physicians are willing to accept new Medicaid patients and that is in large part due to “inadequate payment” to the physicians who do.

The Legislature created this problem and failed again this session to change payment rates to physicians who give care to Medicaid patients.

Button also said she would not support Medicaid expansion because it was not “easy” and is politically toxic to her and other Republicans, despite surveys showing bipartisan consensus in Texas in favor of the policy.

When asked what was done this session for women’s health, Button touted her bill increasing information provided to women eligible for the family planning program, Healthy Texas Women.

Reverend Deneen Robinson of the Afiya Center, pushed Button on her bill, saying the Healthy Texas Women program was “not a Medicaid replacement” and was simply “a band-aid… a screening program.”

“If you need further care, you’re going to have to go some place else.”

The Healthy Texas Women program has received similar criticism from advocates for being a political concession from lawmakers after the Legislature cut funding to women’s health programs in 2011. The program has also been bogged down for issues of mismanagement, providers serving less women than before the cuts.

A bill to extend Medicaid maternity coverage from two months postpartum to 12 months postpartum, the #1 recommendation of the Texas Maternal Mortality and Morbidity Task Force, failed to pass this session.

House District 112 constituents deserve better than political gestures. Saving women’s lives should not be a question of what is politically easy. It should be what is in the best interest of your constituents.