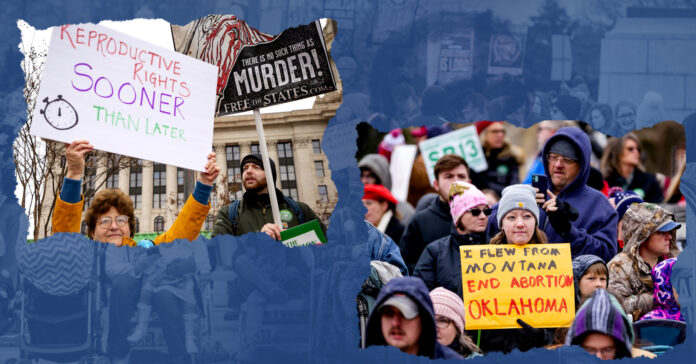 Oklahoma’s state House on Tuesday voted 78-19 to pass a near complete ban on abortions, legislation that far surpasses Texas’ six-week ban. The bill is now headed to the Senate and, if passed, will be the strictest anti-abortion bill in the country.

The legislation — known as House Bill 4327 — bars a physician from performing or inducing an abortion at any point in the pregnancy unless it is “to save the life” of the pregnant person. Similar to Texas’ six-week abortion ban, the new legislation would allow private citizens to pursue civil actions of up to $10,000 against anyone who performs or “aids and abets in the provision of such an abortion.” Lawmakers added an emergency clause for timing so that if the bill is signed into law, it would take effect immediately.

“Abortion rights activists have been warning of this nightmare for months: These bounty hunter laws will have a domino effect across the country, as more and more states ban abortion entirely while Roe v. Wade is still the law of the land,” Elisabeth Smith, director of state policy and advocacy for the Center for Reproductive Rights, said in a statement.

But Roe v. Wade, the landmark decision that established a right to an abortion up until a fetus can live independently outside the womb, could be overturned as soon as this summer. The Supreme Court is expected to rule by June in a case known as Dobbs v. Jackson Women’s Health Organization. While the case ostensibly concerns a 15-week ban passed in Mississippi, the nine justices have been asked to consider whether Roe was wrongly decided and should be overturned entirely. Legal observers expect a conservative majority will issue a decision that either weakens or undoes the Roe v. Wade protection.

In the interim, legislation relying on civil litigation has offered anti-abortion lawmakers a workaround to the Roe v. Wade protections. The Supreme Court has refused to block Texas’ law. Subsequent legal challenges have failed, too. That success has inspired some other Republican-led legislatures to emulate the Texas abortion ban.

Oklahoma’s lawmakers relied heavily on Texas as an example for their bill, with the Republican sponsor of HB 4327, Rep. Wendi Stearman, repeatedly citing the leading role that Jonathan Mitchell, a former Texas solicitor general, played in drafting Oklahoma’s legislation.

Abortion restrictions in states like Oklahoma, which has become a critical access point, would cause a ripple effect across the region. Oklahoma was one of several surrounding states that reported a massive influx of people crossing state lines after Texas’ law went into effect last September.

According to Planned Parenthood data collected between September and December, health centers in Oklahoma, New Mexico, Kansas, Colorado and Missouri saw a nearly 800 percent increase in abortion patients from Texas when compared to the same period one year prior. Some providers in Oklahoma have even reported a 2,500-percent increase in the last six months, and more than half of the total number of abortion patients had a Texas ZIP code.

Myfanwy Jensen-Fellows, director of advocacy for abortion clinic Trust Women, previously noted that many people don’t have the option of traveling for an abortion. Trust Women operates clinics in Oklahoma City and Wichita, Kansas.

“If we lose access in Oklahoma, people who can travel will — but that’s really not a solution,” Jensen-Fellows said. “When one state goes dark, like Texas, people don’t stop getting abortions. They will travel if they can or they will potentially carry unwanted pregnancies to term.”

HB 4327 cleared the House Public Health Committee earlier this month. A six-week ban passed the Senate on March 10, along with five other anti-abortion measures. The legislation bans on abortion 30 days after a person’s last menstrual period, allows pre-Roe v. Wade statutes to take effect if the decision were to be reversed, eliminates any right to abortion in the state, grants “full personhood” rights at the point of conception and allows the state’s health department to contract with private organizations that assist people carrying children to term.

Many other state legislatures are voting on other abortion restrictions, including 15-week bans and “trigger laws” that would ban the procedure immediately if the Supreme Court were to overturn Roe v. Wade.

Idaho succeeded in passing a six-week ban, though the legislation still awaits Gov. Brad Little’s signature. A similar bill is making its way through the Tennessee legislature. While Texas-inspired legislation has been introduced in other Republican-led states — such as Arkansas, Florida and Ohio – most of those bills have stalled, a phenomenon experts suggest may result from the relative unpopularity of its civil enforcement mechanism.

Shefali Luthra contributed to this report.