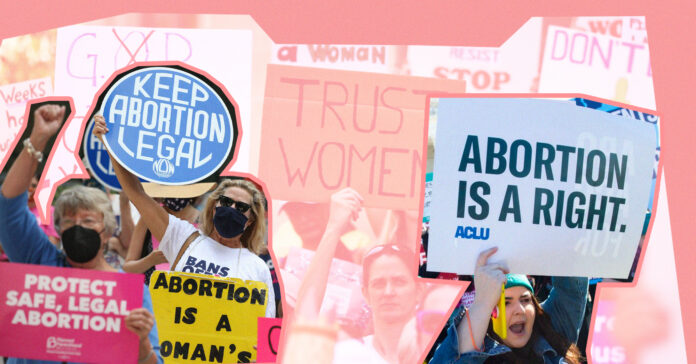 The latest term of the Supreme Court has begun, and reproductive freedom advocates are impatiently waiting to see if Texas’ onerous vigilante law banning most abortions will be struck down or paused. Meanwhile, pregnant people in Texas continue to suffer.

The exact schedule of the issuing of Supreme Court rulings is a famously opaque process, but it looked like we could be expecting a swift answer when the court agreed to hear oral arguments on a fast-tracked case regarding Texas Senate Bill 8. The misnamed “heartbeat bill” bans abortion in the state after six weeks when electrical activity on the fetal cardiac pole is observable. The law also empowers any Texan to sue someone seeking or providing an abortion after the six-week period, which is before most people know that they are pregnant. The law has effectively banned abortion in Texas.

Because enforcement of the law is put in the hands of private citizens instead of state operators, it circumvents the established legal precedents of Roe v. Wade. The Department of Justice sued the state of Texas, arguing that it was intentionally created to avoid constitutional review.

However, Monday came and went with no decision, angering reproductive freedom advocates.

“Every single day that SB 8 is in effect in Texas is a travesty and an injustice for Texans who need abortion care,” said Caroline Duble, political director for Avow, a Texas-based abortion rights advocacy organization told the Dallas Morning News. “We are frustrated that the court is taking so long, and we have been frustrated with the way that they’ve handled this law since the first time it appeared before them.”

The frustration is understandable. Since the ban went into effect, the rate of abortion in Texas has fallen by half. Even the 2013 bill that put many unnecessary restrictions on clinics that ended up closing half of them, didn’t reduce the sheer amount of people receiving health care as Senate Bill 8 has.

Of course, people are still seeking abortions. They’re just being forced to flee the state to obtain them. Wait times for reproductive care in New Mexico, Louisiana, Oklahoma, and Arkansas. California is already preparing to be an oasis with care and is seeing surges in out of state visitors. If the Texas law is upheld, as well as the Mississippi law banning abortion at 16 weeks which is likely to be decided in June, then roughly half the states in America are expected to pass near-total bans on abortion.

The south will be hit particularly hard. Pregnant Texas will have to travel to New Mexico or Arizona to obtain an abortion, a trip that can take two days or more and be prohibitively expensive. This will further reduce the reproductive health options for poor Texans or those who cannot get time off from work.

It will also lead to extremely dangerous pregnancies. Reports have already come in of people with ectopic pregnancies being unable to obtain abortions because doctors fear being sued under the new law and its vague language when it comes to medically necessary abortions. Being forced to travel long distances with an ectopic pregnancy significantly increases the risk for rupture and death. Until the Supreme Court makes its decision as some point in the near future, these dangers will continue.