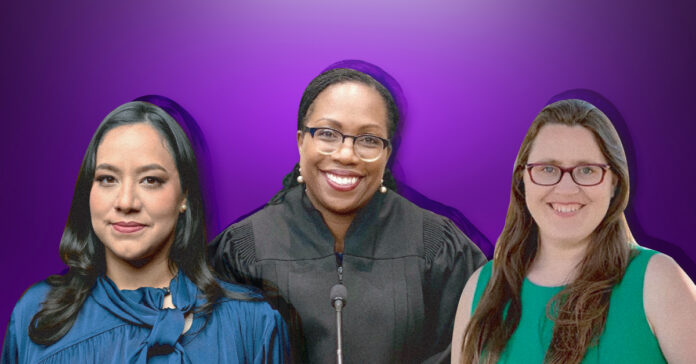 Politics is an area that has always been dominated by men, even if in the past years, more and more women are running for office, men still reign the terrain. It’s 2022 and women are still on an uphill climb toward having equal representation in the United States government.

According to a political science study conducted by Dr. Addie Woerner, no matter how capable a woman is, voters will always scrutinize and compare her with the opposite gender. In the end, it all comes down to if they chose to trust her capabilities over a man’s.

Now try adding a baby to the mix. How will she take care of the kids? How will she have time to do her job? Is she capable of juggling her career and her family?

For Rep. Erin Zwiener, being a mother in the public eye, became a strong part of her identity. Elected in 2018, she unseated former incumbent Republican Jason Isaac and campaigned while pregnant, then gave birth while in office.

In 2019, she was the first member of the Texas Legislature to breastfeed on the floor of the House of Representatives.

“It wasn’t a messaging thing and it wasn’t a big deal. She was hungry. I fed her,” Zwiener said.

It shouldn’t have to be a big deal, but due to societal standards, it was. Women have to strategize ways to appear capable of doing their jobs without downplaying their motherhood or embracing it.

“I could let the pregnancy be a liability or I could try to turn it into a strength. There was no way it was a neutral thing,” Zwiener said when talking about her struggles with pregnancy and motherhood.

“It was pretty easy to hear [negative comments like that one] from people whose support I wouldn’t have anyway, but it broke my heart when I got comments like that from other young women. I want them to believe it’s possible, that they’re not giving up their kids to follow an unusual career path, and they’re not giving up a career to have a family.”

Men are rarely, if ever, judged by their ability to successfully combine fatherhood with politics. Women are forced to such high standards to combine both, that the stress of “failing” is constantly on their plate.

Supreme Court nominee Judge Ketanji Brown talked about her struggles in navigating motherhood and politics during her confirmation hearing on March 23.

“I know it has not been easy as I have tried to navigate the challenges of juggling my career and motherhood. And I fully admit that I did not always get the balance right. But I hope that you have seen that with hard work, determination, and love, it can be done,” Jackson said, shining a light on the constant fear women face to fulfill society’s expectations.

Later on, in her mea culpa, Jackson talked of early mornings and late nights and what it meant when there were judicial hearings during a daughter’s recital and courtroom duties that collided with birthday celebrations, as reported by The Washington Post.

She talked openly about how being absent hurt and how she hoped her daughters would see her ascent to the high court as proof “that you don’t have to be perfect in your career trajectory and you can still end up doing what you want to do.”

Rochelle Garza, a lifelong fighter for the border communities of the Rio Grande Valley and who is running for Texas Attorney General, recently welcomed her first-born daughter into the world.

Finding out she was pregnant was why she decided to run for Texas Attorney General in the first place.

For Garza, the pregnancy made everything more personal.

“I think a lot about what the future holds and what’s at stake for democracy, civil rights, the Constitution,” Garza said in an interview with Business Insider.

It made Garza more conscious of the inequalities in Texas. She began to notice more pregnant women and the issues of access to health care, family leave, and child care that cut across class and race.

“We expect women to bear children, rear children, and maintain jobs,” said Garza. “But we don’t expect that job to be Attorney General of Texas and that’s obviously wrong and that’s why we get laws that are harmful to women and that’s what I’m trying to change.”

Women are expected to efficiently “balance” everything. However, there is no balance when it comes to how much more is expected from a mother than from a father, or where is the balance in a woman getting paid less than her male counterpart.

Women in politics are an example to females everywhere that it is possible to break down societal barriers and hold positions of power that up until now were only meant for men.