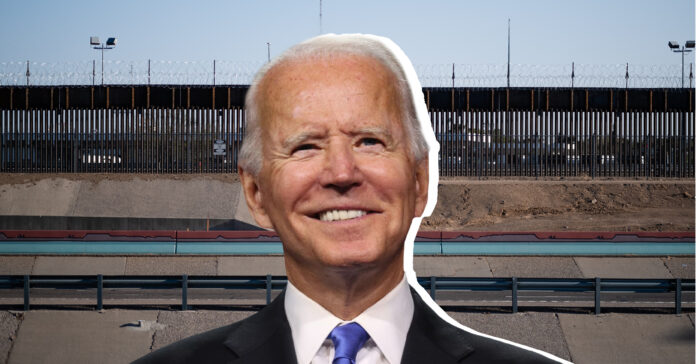 Despite decades of congressional ineptitude and unwillingness to compromise on immigration policy, President Joe Biden arrived at the border facing further criticism in the form of a letter handed to him by Gov. Greg Abbott as he deplaned Air Force One in El Paso Sunday.

Abbott’s letter, which began “Your visit to our southern border with Mexico today is $20 billion too little and two years too late,” was virtually the only interaction between the two men. Abbott’s office said that the governor was not invited to join the president’s tour.

Abbott has long been a vocal critic of Biden’s immigration policies and has repeatedly called on him to visit the border as the number of migrant encounters has broken records over the last year.

“The president who caused the chaos at the border needed to be here. It just so happens he’s two years and about $20 billion too late,” Abbott told reporters at the airport. “He needs to step up and take swift action, including reimbursing the state of Texas toward the money we spent but providing more resources for federal government to do its job. Also this is nothing but for show unless he begins to enforce the immigration laws that already exist.”

Asked about his conversation with Biden, Abbott added, “He said he wanted to work with us on it.”

Biden toured the border area in El Paso, the busiest entry point for migrants into the U.S., to see firsthand the crisis in action following the announcement of policy changes enacted by the administration last week to help alleviate the pressure at the border.

However, Biden did not meet with any migrants during his visit, drawing criticism on all sides of the issue.

The visit to the US-Mexico border is the first in Biden’s presidency and comes as lawmakers and immigrant rights advocacy groups widely condemn his administration’s latest response to the escalating humanitarian crisis there.

Biden’s office said the trip aimed to “assess border enforcement operations and meet with local elected officials and community leaders who have been important partners in managing the historic number of migrants fleeing political oppression and gang violence.”

The group of leaders visited the Bridge of America’s port of entry, which connects El Paso to Ciudad Juárez on the Mexican side. The bridge is a critical route for tourists and commercial trade. The president also visited the El Paso County Migrant Services Center. Biden also made an unscheduled stop near an 18-foot-tall border fence along the border with Mexico, according to the Texas Tribune.

The visit comes after new immigration rules were announced last week that will expand legal immigration to the U.S. for migrants from Cuba, Haiti, Nicaragua, and Venezuela.

The new program deals only with the migrants from those four countries and will allow 30,000 migrants to enter the country from each of the four countries per month, provided they have U.S. sponsorship and clean background checks.

However, the U.S. will send back to Mexico any migrants from those countries who do not meet those requirements if their point of entry is the southern border.

The new policy could result in up to 360,000 people cumulatively from these four nations lawfully entering the U.S. this year. But many more than that number are attempting to cross into the U.S. on foot. Just from those four nations 82,286 border authority encounters were recorded in November alone.

In response to the announced changes, which represent a major change to immigration rules, hundreds of migrant rights supporters marched through the streets of El Paso on Saturday afternoon to reassure migrants, many of whom were huddling outside a church.

Democrats and human rights activists alike have condemned his new enforcement plan as a “humanitarian disgrace,” as it maintains some of the policies of his predecessor, former president Trump.

Republicans blasted his delay in coming to a border they say is “wide open” to illegal immigration, a familiar refrain that is perhaps the top talking point for GOP fundraising efforts as they continue to demonize migrants.

And ahead of the North American leaders summit this week, Mexican officials have warned that his new proposals would cross a “red line” for them, despite the diplomatic reception planned for his visit.

The new restrictions will stand even if the U.S. Supreme Court ends the Trump-era law known as Title 42 that allows U.S. authorities to turn away asylum-seekers, as part of the U.S. response to the Covid-19 pandemic.

According to CNN, neither Title 42 nor the new program could be possible without the cooperation of the Mexican government, and continued support from Mexican President Andrés Manuel López Obrador will likely be addressed at the North American leaders summit Tuesday. The meeting will also include Canadian Prime Minister Justin Trudeau.

When asked by reporters following his tour what he might have learned during his visit, Biden said, “They need a lot of resources. We’re going to get it for them.”