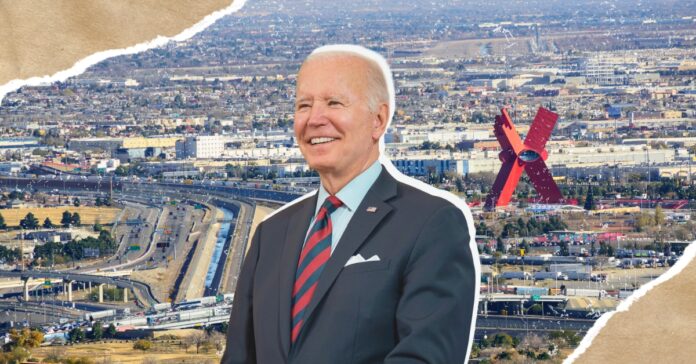 President Joe Biden plans to visit the Texas border at El Paso Sunday as he prepares for his North American Leaders’ Summit in Mexico City on Monday and Tuesday, marking the first time he has visited the area since taking office in 2021.

The announcement comes as new immigration rules were being rolled out by the administration that will expand legal immigration to the U.S. for migrants from Cuba, Haiti, and Nicaragua, as well as Venezuela, as previously announced in October. The scope of the new program deals only with the migrants from those four impoverished countries facing political and economic turmoil in the region.

Under the new policy, the U.S. will allow 30,000 migrants to enter the country from those four countries per month, provided they have U.S. sponsorship and clean background checks.

However, the U.S. will send back to Mexico any migrants from those countries who do not meet those requirements if their point of entry is the southern border.

“Effective immediately, nationals from Venezuela, Nicaragua, Cuba and Haiti who attempt to cross our border unlawfully will be very swiftly returned to Mexico and will be found ineligible for this program,” a senior administration official told reporters.

Biden will be in Mexico City next week on Jan. 9 and 10 to meet with Mexican President Andrés Manuel López Obrador, as part of the North American leaders meeting, also known as the “Three Amigos” summit with Canadian Prime Minister Justin Trudeau.

Details of the trip are still being finalized, however. Biden told reporters on Wednesday that he wants to see “peace and security” at the border. “I’m going to see what’s going on,” Biden said.

The expansion of the humanitarian program launched in October forces migrants to apply for asylum from their home country while expelling those who tried to enter the U.S. unlawfully from Mexico in response to the massing of migrants at the border.

So, as part of the effort to ease the humanitarian crisis at the border, the administration began to allow Venezuelans to enter the country via inbound flights if they applied for asylum from abroad before reaching the U.S.

The result of the combined efforts was that illegal crossings dropped 70 percent, falling from about 21,000 in October to 6,200 in November, according to the U.S. Customs and Border Protection.

However, other factors such as harsh winter weather may have also been a factor.

“We view this as one of the most significant achievements of the Venezuela process: fewer people risking their lives and their entire life savings at the hands of human smugglers,” a senior administration official said.

Title 42, a Trump-era immigration policy, allows authorities to quickly expel asylum-seekers at the border and includes a five-year ban on re-entry. The administration had sought to end that policy but lost their effort to do so when the Supreme Court decided last month that Title 42 would remain in effect.

Homeland Security Secretary Alejandro Mayorkas acknowledged Wednesday that the sheer number of migrants at the US-Mexico border is “straining our system,” but stressed that the department is managing the situation as well as possible.

In fiscal 2022, U.S. Border Patrol agents recorded 2.4 million encounters with migrants at the southwest border — a record-breaking number — thus, the White House hopes the moves announced this week will decrease the numbers in 2023.

“We’re operating within a system that is fundamentally broken. No one disagrees with that. We just can’t seem to agree upon the solution and a solution is long, long overdue. Within the broken immigration system that we are operating, we are managing the number of encounters and we are prepared to address the end of Title 42,” he said during a Washington Post event Wednesday.

The U.S. will also allow 20,000 refugees from Latin American and Caribbean countries over the next two years, which will more than triple refugee admissions from the Western Hemisphere, the administration said.

Biden, often criticized by congressional Republicans for not visiting the border sooner, said in a speech in advance of the trip that his actions regarding immigration announced this week are in response to the GOP’s continued efforts to kick the proverbial can down the road on the issue.

Border security is a top Republican priority, and they have said they would investigate the administration’s handling of the issue.