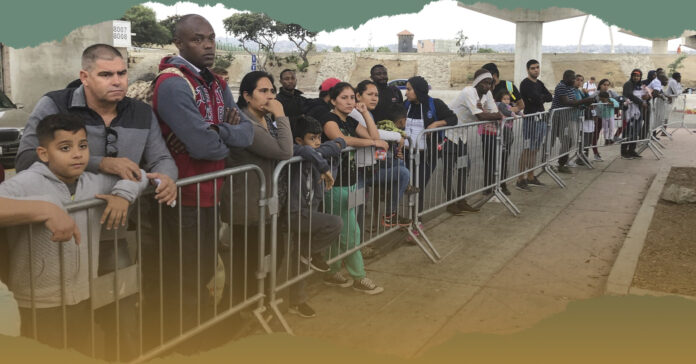 Last week, the Biden administration argued that the Trump-era “Remain In Mexico” immigration policy contributed to migrants being trafficked. The U.S. Supreme Court agreed and ruled they had a right to end the policy once and for all.

“Remain In Mexico” forced asylum-seekers to wait in Mexico as their cases made their way through U.S. immigration courts – the policy was criticized for returning migrants into a situation that would further their desperation and make them vulnerable to organized crime.

To make their case, the Biden administration used the story of a South American father and his son, who were thrown out of the U.S. and into the claws of a Mexican cartel.

According to The Houston Chronicle, Carlos and his toddler, Oscar, were on the run and tried to seek asylum but failed. They crossed the border near Reynosa and were detained in the Rio Grande Valley by U.S. border officials for six days — and sent back to Mexico.

Upon their arrival in Mexico, Carlos was forced to seek help and turned to the smuggler who had helped him cross the border, but quickly regretted it when the smuggler brought him to a hotel that was controlled by gang members.

To pay off his debt – for the protection of the shelter and his son’s protection – Carlos was put to work at a warehouse run by Mexico’s Gulf Cartel.

“I thought ‘oh my God’ what have I gotten myself into?” Carlos said. He then worked for several weeks, quietly taking photos and making notes of the cartel’s operations. After a month, he convinced the cartel to let him attend his immigration court hearing.

At the court, he showed the evidence he had gathered and pleaded that he and his son were in grave danger. But according to Carlos, border officials said the only way they would believe his story is if he arrived with a gunshot wound to the stomach.

He was sent back to Mexico and found help from a nonprofit attorney who took his case because of all the evidence he had gathered. He had a final asylum hearing scheduled for March 2020 in the early days of the pandemic, and that was when it all went sideways for Carlos — again.

The Trump administration closed the border and implemented another major barrier for asylum seekers: Title 42. The policy allowed the government to forgo the asylum process altogether using the argument that they were protecting public health, as reported by The Houston Chronicle.

Carlos and his son spent more than a year in Mexico hiding from cartel members. It wasn’t until President Joe Biden took office in January 2021, that Carlos and his son were granted “parole”, after “Remain in Mexico” was suspended.

Shortly after, the states of Texas and Missouri sued Biden, leading to a federal judge temporarily stopping the program from fully winding down. Now, under the Supreme Court ruling, the Biden administration has the authority to fully rescind the program.

However, last Thursday’s border decision does not include the Title 42 policy, since a legally similar GOP-led lawsuit is still in place.

Sabrine Talukder, director of the Sunita Jain Anti-Trafficking Policy Initiative at Loyola Marymount University, helped work Carlos’ story in the amicus brief that was filed to the Supreme Court and believes the Remain in Mexico decision bodes well for the current legal battle over Title 42.

Talukder told The Houston Chronicle that there have been very few things that have been as damaging for her clients as these immigration policies.

“Essentially, they’ve created thousands of people that are just sitting ducks, desperate and so easy to exploit,” she said.