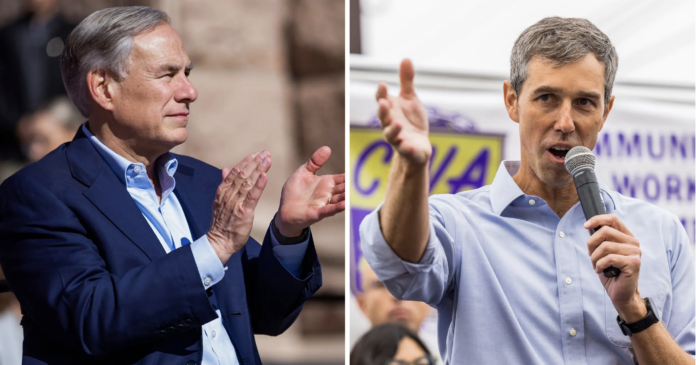 Republican Gov. Greg Abbott’s lead over Democratic challenger Beto O’Rourke narrowed to 6 points last month, according to a poll conducted by the Texas Politics Project at the University of Texas at Austin. That’s a smaller gap than when Republican George W. Bush ousted Democrat Ann Richards in 1994 with a 7.6-point win.

Abbott’s unfavorability ratings are also the highest they’ve ever been at 44%, according to the poll, which was conducted after the deadliest school shooting in state history and almost entirely before the U.S. Supreme Court overturned the constitutional right to an abortion.

Jim Henson, director of the Texas Politics Project, said the mass shooting in Uvalde and scrutiny over how it was handled could have contributed to Abbott’s increased unfavorability, but it’s hard to say how much exactly.

The political poll did not include specific questions related to the shooting in Uvalde, but it did ask participants to rate Abbott’s performance on handling gun violence. About 36% of participants said they approve of how the governor has handled this issue, while 45% said they disapprove.

The mass shooting in Uvalde and the overturning of Roe v. Wade have laid the groundwork for a contentious final four months in the race to lead the state. While O’Rourke works to harness the anti-incumbent energy spurred by the seismic events of the past few months, Abbott is banking on a general election centered on stronger issues for him: the economy and the border.

Mounting expectations over how the Supreme Court would rule on abortion access could be another factor that contributed to Abbott’s weakened ratings, Henson said. Although the poll ended the same day Roe v. Wade was overturned, it included questions about abortion access that show how voters feel regarding the issue. About 36% of participants said they approve of how Abbott has handled policies related to abortion access, and 46% said they disapprove.

Now that Roe v. Wade has been overturned and Texas is poised to completely outlaw abortion access, it will likely be a pivotal topic in the upcoming months, Henson said.

“If we look back at the half dozen times we’ve asked the standard abortion questions since 2014, no more than a quarter of Republicans have ever said that by law abortion should never be permitted,” he said.

Voters will see that reality reflected in how Abbott and O’Rourke discuss abortion access in the upcoming months, he said.

Despite the ratings, Abbott carries most of the advantages in the race: His campaign is well funded for a midterm election that is expected to favor Republicans across the country. The governor’s allies argue that voters are more worried about skyrocketing inflation and illegal immigration — and that O’Rourke cannot separate himself from President Joe Biden, who is very unpopular in Texas.

Disclosure: University of Texas at Austin has been a financial supporter of The Texas Tribune, a nonprofit, nonpartisan news organization that is funded in part by donations from members, foundations and corporate sponsors. Financial supporters play no role in the Tribune’s journalism. Find a complete list of them here.