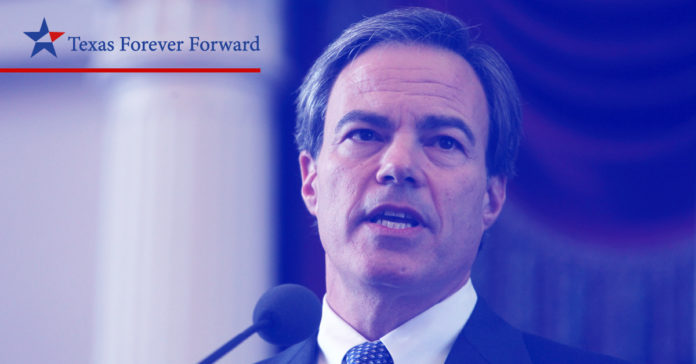 Joe Straus (R-San Antonio) will return to Texas politics after retiring from his representative seat in 2017. With the announcement of Texas Forever Forward, a new PAC for which he will serve as chairman, it appears Straus’ hiatus from the political scene may have been gearing up for something bigger.

After contributing $2.5 million of his old campaign account into the funding for Texas Forever Forward, the group had $8 million in funding as of January of this year. According to the PAC’s purpose statement, under his leadership we should see a focus on education and embracing of the state’s diversity.

In a statement Straus said, “We are launching this effort because I believe Texas needs leaders who are forward-looking and dedicated to bringing creative, problem-solving ideas to the new challenges our state faces as our population rapidly grows.”

While some in Texas are joyous, remembering Straus as a reasonable leader and constructive politician, members of his own party are wary of his moderate-leaning ideology.

According to the website, this PAC will support candidates, elected officials, and ideas that focus on the unique challenges in Texas. The vision statement goes on to share the promotion of a message that is “optimistic, inclusive, entrepreneurial and future-focused, and advance a shared vision to create the greatest possible opportunity for future generations of Texans.”

Straus served 14 years in the House, with five terms as Speaker of the House. He had the reputation of working across the aisle, focusing on economic and business ventures for Texans rather than social issues. In fact, there were several moments in his leadership where he clashed with Lieutenant Governor Dan Patrick in the fight for Texas priorities.

During the 86th legislative session, Texas felt different than in previous years. The 2018 election shifted things in the Lone Star State, and citizens are more aware and politically engaged. There were some political moves that followed party lines, but the legislature largely touted inclusivity and working together.

Texas Forever Forward states that they want to “promote a thoughtful, conservative approach to governing.” Straus may be looking at a battle, but his stance hasn’t changed much since his House days. “It’s time to unite Texas in civic participation and ensure our next decades are the very best in our long, proud history.”

Ted Cruz Wishes To Overturn Law That Blocked Him From Recovering...