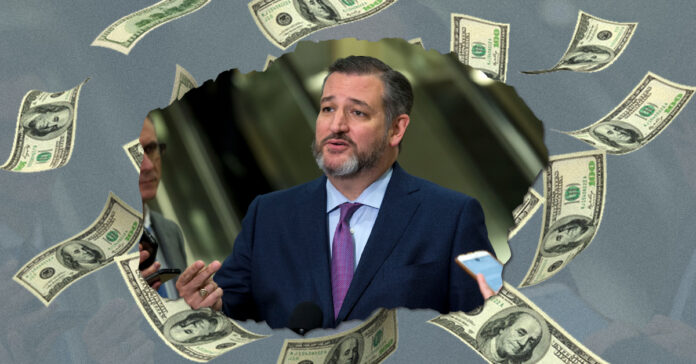 In 2012 Ted Cruz never recovered over $500,000 he loaned his first campaign for U.S. senator when running against Lt. Gov. David Dewhurst. Still hung up on the money, Cruz wishes to overturn the law that blocked him, claiming it is unconstitutional.

The Bipartisan Campaign Reform Act of 2002 bans any victorious federal candidate from repaying (directly or indirectly) personal loans – given prior to Election Day – that exceed $250,000. The limit was established on the grounds that the money collected after an election day no longer helps a candidate win office, instead, it goes directly into the electee’s pocket.

Even though Cruz managed to recover almost all the money he loaned in 2012 (over $1 million), he disagreed with the regulations that limited him and decided to challenge the law.

“The federal government’s restrictions on a candidate’s ability to loan his own money to his own campaign violate the First Amendment,” a Cruz spokesperson told The Texas Tribune in an email. “Senator Cruz seeks to vindicate his rights under the First Amendment and the rights of all those who would seek election to federal office.”

Next month, his campaign’s lawsuit against The Federal Election Commission will reach the Supreme Court. However, the lawsuit is not about the 2012 loan but rather about a separate loan Cruz gave his campaign in 2018 before he won his reelection. He intentionally loaned $260,000 so he could sue to overturn the law and raise money to recover the $10,000 that goes over the $250,000 limit.

According to The Texas Tribune, Cruz’s Lawyers plan to argue the limit is unconstitutional, arbitrarily limits political speech, and deters candidates from loaning money to their campaigns.

Some critics believe Cruz’s lawsuit is sketchy because it will use the money raised after the election to restore the politicians’ personal funds that have nothing to do with their campaigns.

“The money they contribute is literally going into Ted Cruz’s bank account,” said Seth Nesin, the FEC’s former lead attorney on this case who left the agency in August after 13 years. “That’s what really makes it seem, to at least me and some other people, quite sketchy.”

On the other hand, conservatives argue it hinders political speech, the nonprofit Institute for Free Speech believes it disincentivizes candidates from loaning money to their campaigns.

“Contributions to a political campaign promote more expenditures by that campaign, which results in more political speech,” wrote Donald A. Daugherty for the Institute for Free Speech.

They also argue the government does not sufficiently prove the law prevents corruption, the limit “runs afoul of the First Amendment,” said Judge Neomi Rao, appointed to the D.C. Circuit Court of Appeals by former President Donald Trump.

Lawyers representing Ted Cruz for Senate have until Dec. 15 to file their brief in the case. Oral arguments are on Jan. 19. If the limit is considered unconstitutional, future candidates could theoretically repay loans of infinite amounts with post-election contributions, as reported by The Texas Tribune.

We can't trust Dennis Paul with our money

Texas Supreme Court Changes their Mind after a $250k Donation from...