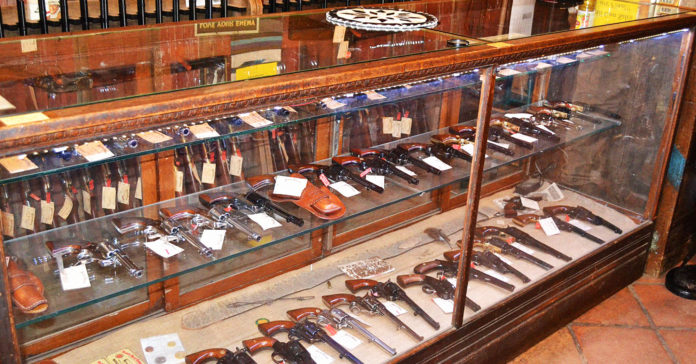 COVID-19 and the stay-at-home orders that now accompany it have sparked a nationwide debate about gun shops. Are they essential? Should they be allowed to stay open when other businesses have been forced to close? The answers to those questions depend on who is answering.

“I don’t believe the second amendment means you have to keep gun shops open at a time when there is increasing hysteria,” said University of Houston professor and constitutional law expert Pete Linzer.

“People are hitting each other, spitting on each other and things like that. People are dying. It seems to me you can close the gun shops.”

On the other end of the spectrum is Michael Cargill, who owns Central Texas Gun Works in Austin.

“A lot of people may find themselves in situations where they may need to be their own first responders,” Cargill said in an interview with National Public Radio.

The stay-at-home orders in Texas have not specified gun shops as essential businesses, but they have also not forced them to close.

In an effort to clear up what he perceived as confusion, Texas Attorney General Ken Paxton issued an opinion on the issue. In it, he concludes that while municipal and county officials possess general emergency authority to control the movement of persons and the occupancy of premises in a local disaster area, they do not have authority to regulate or restrict the sale of firearms.

Linzer argues that Paxton’s opinions are not law.

“His opinions are not binding on people. They are opinions. If he wants to go into court for injunctions, that is a different matter. So far, he hasn’t won,” Linder said.

Law Professor Gary Jacobsohn at the University of Texas said Paxton’s opinion would be upheld as being within the government’s discretion to determine which businesses are “essential.” He noted that these conflicts are not unique to Texas and adds that politics come into play on these issues.

“In particular, First and Second Amendment challenges, especially in “red” states, will doubtless generate a mix of legal and political entanglements,” he wrote in response to written questions.

While the debate rages over whether requiring gun shops to close during the pandemic is necessary, let alone constitutional, there are growing indications that people feel the need to arm themselves during the pandemic. According to the FBI, background checks, viewed as a barometer of gun sales, have skyrocketed in the last month. Gun retailers reported that a majority of the March sales were to first-time buyers.A legal challenge out of Houston may help decide the constitutional questions. Anti-LGBT activist and GOP hardliner Steve Hotze went to court earlier this week to have Harris County’s stay-at-home order declared unconstitutional on the grounds it violates first and second amendment rights. He is seeking an injunction to halt the order from remaining in effect. So far, there has been no decision from the court.