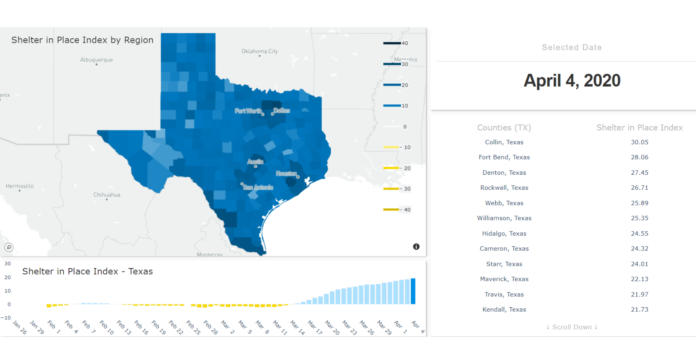 A California company has developed an online dashboard that tracks whether we are staying home during the pandemic. The analytics show Texans are doing their part.

“I think shelter-in-place is working,” said SafeGraph Vice President of Marketing Evan Barry. “In time lapse you can see how regions are responding to orders at different points in the outbreak. The map is full of blues. People are staying in place more than average.”

The data is aggregated from over 40 million mobile devices, around 10 percent of all the devices in the country. The data is not coming directly from cellphone carriers. Instead the tracking data is from third-party apps such as fitness apps that show movement. The data is further aggregated to ensure that it cannot be tracked back to individuals. “Home” is defined in the data as the “most common nighttime location in recent months identified to a precision of about 100 square meters,” and distance traveled from it is not factored in. Where you go next door or across town makes no difference.

The Stay at Home Index is calculated as an integer over or under the average times an individual leaves home. As SafeGraph puts it, “If the baseline rate of people staying home for a county is 20 percent, and we estimate 30 percent of the population is staying home on March 27th, then the index value for March 27th would be 30 percent minus 20 percent, to equal 10 percent.” In layman’s terms, the higher the number, the more people are adhering to shelter-in-place orders.

And Texas is doing pretty well! Four counties in Texas rank in the top fifty adherents to social distancing: Colin, Fort Bend, Denton, and Rockwall. The four biggest cities in Texas all have averages over 19 percent. The lowest score in the state is Winkler County, with 5.61 percent.

That said, Texas is far behind many other states, particularly New York and New Jersey, which dominate the top 10 places doing the most social distancing. This tracks with some of the academic research that has been done using the SafeGraph data.

One study done by Marcus O. Painter of St. Louis University and Tian Qiu of the University of Kentucky showed that partisan politics tends to play a dramatic role in how much people are social distancing. They found that “Residents in Republican counties are less likely to completely stay at home after a state order has been implemented relative to those in Democratic counties.” This can be seen in the interactive map as the deepest blues tend to be clustered around the liberal strongholds in the state like Houston and Austin. Painter and Qiu theorize that Republican President Donald Trump’s initial reticence to take the virus seriously may have been a factor. By contrast, Democrats in states with Republican governors who have issued shelter-in-place orders also observe social distancing less, though not to quite as high a degree.

“Republicans and misaligned Democrats are less likely to adhere to these orders, suggesting that bipartisan support for social distancing measures is a key factor in how quickly we can mitigate the spread of the novel coronavirus,” the study says.

What is inarguable is that social distancing is working as a method to slow the spread of COVID-19. Data from the Kinder Institute at Rice University highlights the beneficial effect a united and effective message is having. By their estimates, robust social distancing between March 24 and April 6 has saved the lives of 4,533 Houstonians and prevented the hospitalization of an additional 48,812. Projections through the end of April anticipate saving over 18,000 lives just in the Bayou City alone. If the intervention had not occurred, the model estimates over 2 million could have been infected in the Greater Houston area and the death toll could have reached 24,000.

Though Texas has not been the swiftest in responding to the virus – Gov. Greg Abbott didn’t issue a stay-at-home order until March 31, preferring to leave the decision to local jurisdictions – the state has generally embraced the social distancing protocols, particularly in cities.