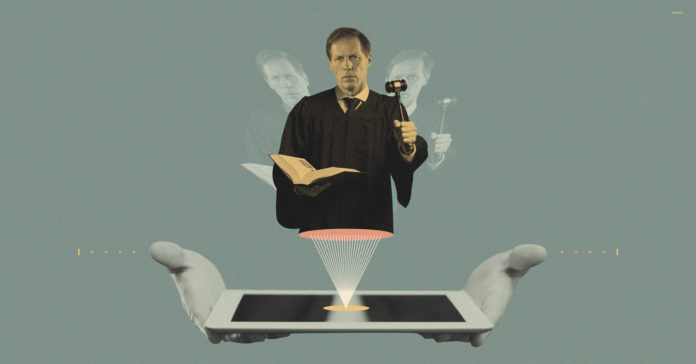 History was made this week as Texas held the country’s first ever virtual criminal jury trial — for a traffic ticket.

“Each trial requires extensive planning & modifications to keep everyone safe … But it is an enormous challenge,”  Slayton wrote on Twitter.

It’s a reminder for Texans — and Americans — that the pandemic has changed the way serving your public duty works, and it’ll likely be that way for a while. But it also raises the question: is this a viable solution for jury trials? What are the new rules after seeing how this first one happened?

Earlier during the pandemic, court administrators had a familiar message for those inquiring about their cases and trials: “you’ll have to wait.”

In-person jury trials had been prohibited until Sept. 1, but a new order from the Texas Supreme Court has pushed the date back to Oct. 1, causing cases to stack up and requiring creative solutions for the limited ones that have been approved to be heard, either virtually or in person. Since June 1, in-person hearings have been allowed if a remote proceeding is not possible, and judges were hearing cases under very specific conditions. Some cities, like Houston, are fully postponing jury duty until Oct. 1.

Although this wasn’t the first virtual jury trial — in May, the Collin County court held a virtual civil jury trial that was nonbinding — it was the first jury trial for a criminal case.

It set an example for cases to follow, and it came with much testing of how this new system might work. Chu presided over jury selection and qualification exactly the same way as normal in-person selection would happen. But Slayton mentioned in an interview with Bloomberg Law that the virtual jury had an unexpected benefit.

“The jurors were very attentive in that trial,” Slayton said. “The attorneys and the judge reported that they were even more transparent, open, and honest during the jury selection phase than they are in the courtroom. Perhaps because they’re more comfortable at home.”

Technical delays, frozen Zoom screens, fear of interruptions from family members or pets, and concerns around impartiality are all things the courts will need to work out as they test the viability of virtual trials. There are also new restrictions for jurors, per the judge’s admonishments: they’re not allowed to Google the case, use their phones during the Zoom call, post on social media, or talk to others who aren’t a part of the case — things that are all harder to police from home. Jurors were asked to make their settings as quiet and uninterrupted as possible, turning off all digital devices except the one they were using to connect to Zoom.

Chu was especially watchful, even saying jurors weren’t allowed to step away from the screen for any reason, including getting a drink of water.

Other legal experts have cautioned that when it comes to criminal cases, technological glitches could become “unconstitutional,” such as the loss or limitation of the right and ability for a defendant to confront a witness, or how it’s easier for a defendant to communicate easily and privately with their lawyer when they are sitting side by side rather than virtually. The length or level of complication of a trial could also impact how well a virtual format would work.

A virtual format also welcomes more media attention and curiosity from the public, who can tune in to the whole process via YouTube.

Still, Chu reminded jurors on his case — and perhaps an encouragement to future jurors in virtual trials — that the ability to serve as a juror is a great and vital service to their city and state. Even if a pandemic slows proceedings, the role they play in the justice system can’t be discounted.

“This is the nation’s first full jury trial by Zoom,” Chu told the jurors as he released them just before the end of the day. “History has been made, and I hope you take solace in the fact you were part of this and providing justice.”